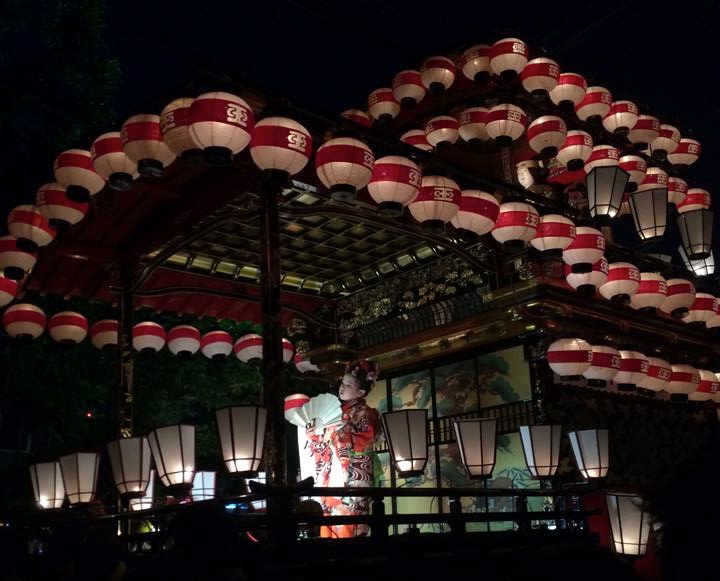 Usually, the town I currently reside in in Japan is calm and quiet. The only crowds that I see in the course of an average day are either a band of elementary school children on their way home from school with their uniform school hats and backpacks or a gang of senior citizens filing out of a coach bus (also somehow with almost-matching hats and backpacks) to tour the famous Basho Park—dedicated to no other than Matsuo Basho who finished his journey across Japan at the very spot.

Two weekends ago, the population of the town skyrocketed to maximum capacity. On a normal night on my bike ride home, I am met by perhaps a few stray cats, some late night commuters driving past, and a couple of rare pedestrians or fellow bikers. But two weekends ago, I was met by music, brightly lit tents with games and food, colorful floats, and believe it or not—hundreds of people. As I walked around with friends in shock and awe, I couldn’t help but voice, “Where did all these people come from? Is this really the same town?” This was the moment I discovered (or perhaps rediscovered) the Japanese magic that is Omatsuri.

I have distinct childhood memories of going to Omatsuri, which roughly translates in English to “festival.” I remember winning some goldfish at the “kingyo sukui” tent, a Tamagotchi at a ring toss tent, eating some Takoyaki and drinking a bottle of Ramune that the rough old man at the tent would pop open for me.

So you can only imagine my excitement when I walked through the Omatsuri as a 23-year-old. It was as though someone had pushed the rewind button and I was reliving my days as a happy kid in Japan. In the course of two days that I attended my town’s Omatsuri, I ate a chocolate-covered banana, candied strawberries, a plate of yakisoba, some takoyaki, a rice ball on a stick covered with barbequed beef, chili fries, curly fries on a stick, and grilled squid on a stick. I saw beautiful, historical floats carried by young men in traditional wear and little girls in kimonos dancing on said floats. There were lots of whistles and “wasshoi!”s as well as sounds of constant chatter and laughter. It was so delightful and really as though I had come to a different town.

And just as fast as it happened, it was all over in a heartbeat. Biking home on Sunday night after it all ended was unrealistically sad: the silence, the people sweeping the streets, the dimness… Thankfully, Omatsuri is a common occurrence everywhere in Japan, and as the weather warms, its frequency is only going to increase—my childish self is filled with happiness.