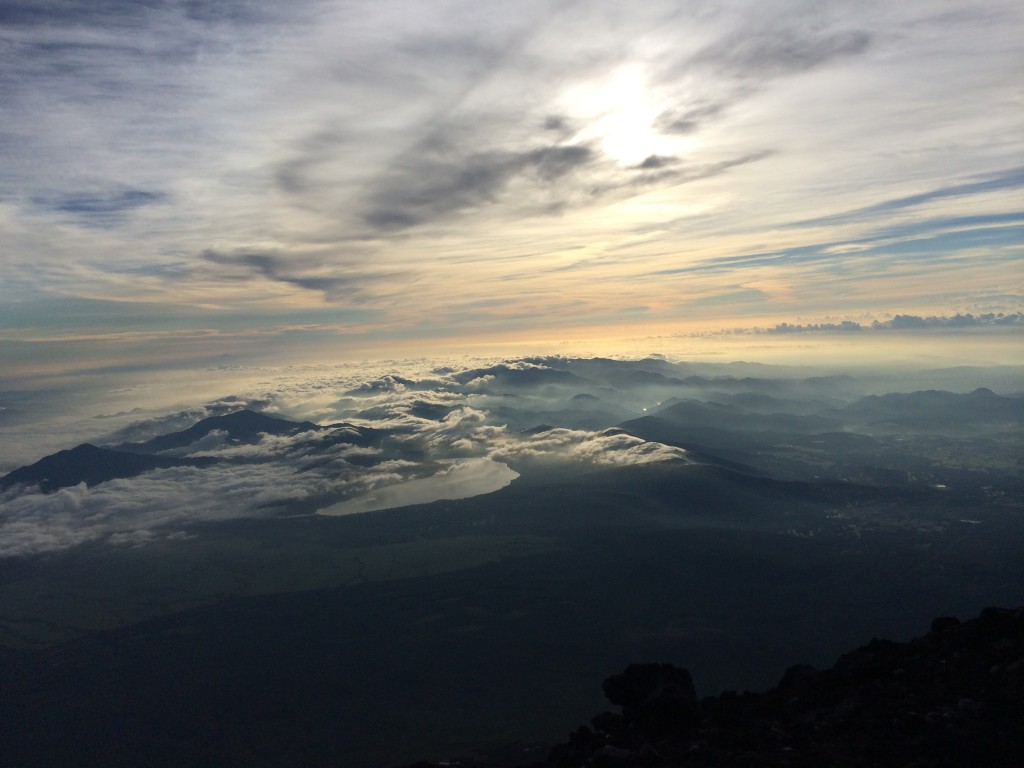 When I first received an invitation from an American friend to climb Mt. Fuji, my immediate reaction was to chuckle to myself while muttering, “yeah right.” I carefully crafted a half sarcastic response rejecting the idea without sounding too nasty. Taking that into account, it is just as big of a mystery for me as it is for you that fast forward a couple of months and I was on a bus with a group of English teachers, about to embark on a journey to reach the summit of the biggest mountain in Japan.

For many Japanese people, Mt. Fuji is a holy site that symbolizes the beauty and serenity of Japan as a nation. It is a 3,776 meter(12,388 feet)-tall active volcano although it has not erupted since the early 1700s. Many view the climb as a rite of passage, and it is said that praying at the summit during sunrise will give you a lifetime of fortune.

Ironically enough, most of my Japanese friends and family reacted with shock and near horror when I told them that I had planned to climb the massive mountain. They told me that they couldn’t believe that I was actually going to do it; to please be careful and not hurt myself; that they could never imagine going up there themselves. My friends from home, however, reacted more supportively and thought it was one of the coolest things that I was ever going to do in my life (I guess they weren’t too far off on that one…).

I can confidently say that I am no mountaineer. The only mountain I had ever climbed before this was Bear Mountain in upstate, New York, and I distinctly remember asking “Are we there yet?” about a thousand times during the journey. I mean, just the name “Bear Mountain” reeks of adorableness, doesn’t it? 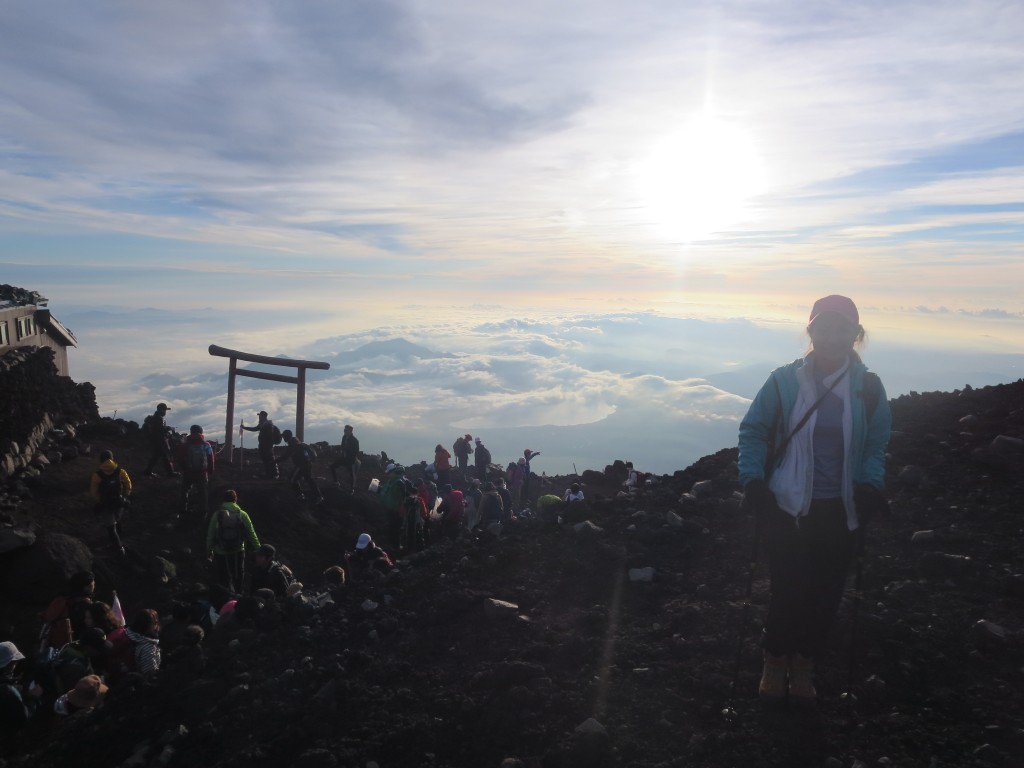 The start of the climb on Fuji was deceivingly easy. Sure, my backpack was heavy (filled with too much chocolate and dried fruits) but it wasn’t impossible. I knew it couldn’t be this easy… And it wasn’t. Soon enough, the climb became much steeper and I found myself shoving my rental sticks back into my backpack so that I can scramble up the boulders on all fours. I could almost hear the wondrous Fuji-San rumbling with laughter at my poor form and turtle speed.

At one point, I saw a tiny red Tori (gate usually placed in front of shrines) way up at the top and said aloud, “Wow, is that the summit, guys?? We can actually see it from here??” and I was quickly shot down with ridicule. “You’re joking, right?” “That’s definitely not the summit.” “Rebecca, that’s not even where we’re staying for the night.” Ouch.

Physically, I was all right during the climb. I was tired and my body felt heavier than usual, but nothing was in pain and I didn’t have anything to really stop me from moving forward. It was definitely more challenging mentally. There was a sense of anxiety that stemmed from not being able to see the end and not being able to just turn around and walk away from it all. There was a sense of fear from clambering over huge rocks and the possibility of plummeting to my death with one wrong move. There was a sense of nervousness from the chance of becoming sick from the altitude and not being able to go on with the group. Instead of worrying about all of this and making myself crazy, I decided to concentrate on my feet and on my breath: One-two, one-two. In… Out. In…. Out. With this new practice, things got a bit easier.

It took us about six hours to finally reach our mountain hut, where we were served some curry that I cannot even really remember tasting because I most likely just swallowed it all down. We were then guided to a space where we could lay down to get some sleep before setting off in the early morning hours again. The sleeping bags were so close to each other that one wrong turn would have ended up in an accidental kiss with my neighbor, although I was lucky enough to sleep between my two friends.

At about half past two in the morning, my friend and I put on our headlamps and set off into the darkness to finally reach the summit. The stars were breathtaking, and it was hard not to get distracted by them as my sleepy feet scrambled up the boulders once more. I got back into my routine: one-two, one-two. I talked to myself more than I normally would: “You can do it. That’s it, just one step at a time. Almost there!” I giggled as the safety guides shouted things like, “it isn’t sunrise yet! Don’t stop to take pictures, it’s too early for that!” Most people didn’t listen—I think we were too sleepy to make any rational decisions at this point.

We passed the last white Tori and reached our destination at about five in the morning. I almost cried from happiness but I’m also really emotional in the morning. My friend and I chose a place to sit and waited for the sunrise. 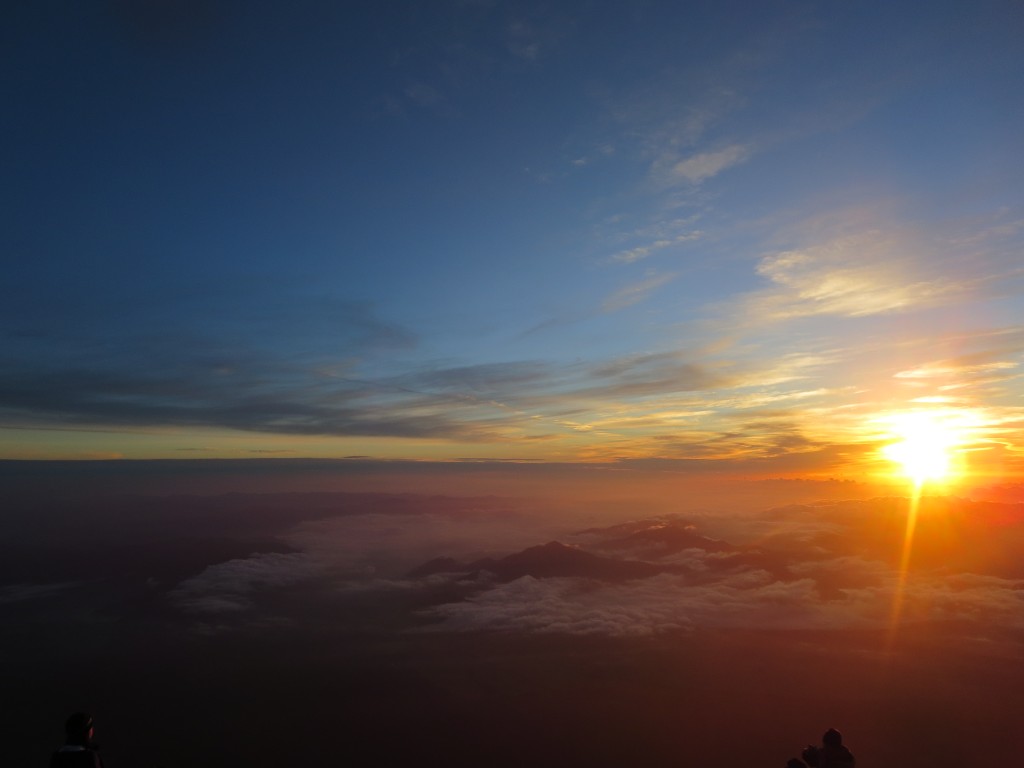 When the sun finally peaked into the horizon, I couldn’t really find any words. I kind of just sat there, my mouth gaping open but no sounds coming out of it. There weren’t any words that could appropriately capture my feelings or properly process what was actually happening before my eyes. I felt an intimate connection with Japan that I had never felt before this trip. I also felt like everything that had happened until that moment had been worth it just for that moment. Nothing else really mattered.

The sun quickly made its way up into the sky, and the beautiful sunrise was over as fast as it began. My descent was possibly worse than the actual climb: let’s just say my knees were in a lot of pain, my big toenails left their nail beds, and the sun that had made me tear up with awe a few hours prior didn’t hesitate to burn my skin and drench me in sweat as I got lower down the mountain. Even still, I don’t regret my decision to conquer Mt. Fuji for a second. I somehow feel more whole after the experience, and I have a sense of pride and confidence about myself that I didn’t have before the journey. I can’t say whether I feel more Japanese going through the “Japanese rite of passage,” but I am glad I got to share such an intimate moment with Japan.