On the Road to Dunhuang: Music from the Dunhuang Caves, the Ottoman Empire, and Medieval Spain 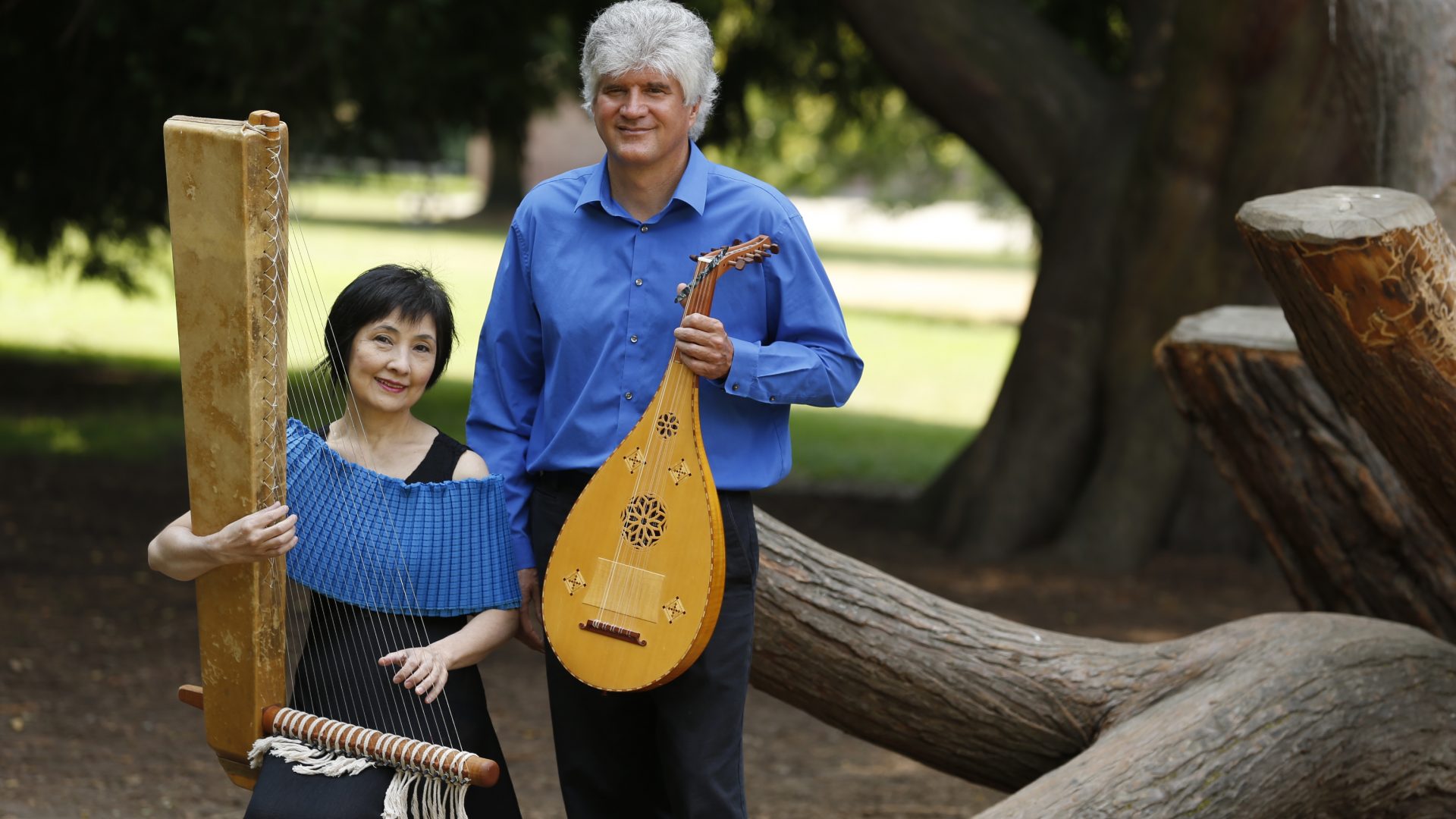 Founded and co-directed by Tomoko Sugawara and August Denhard, the Eurasia Consort brings together two specialists in the ancient musical traditions of East Asia, the Middle East, and Europe. Through their research, teaching, and performances, they seek a common understanding of the world’s great music traditions along the ancient Silk Road.

The Silk Road was an interlocking trade route that connected to the Far East, Central Asia, the Middle East, North Africa and Europe. For about 1,000 years it was a conduit not only for trade, but for religions, ideas, innovations, and music.

During the Tang Dynasty, the Chinese court loved foreign music, in particular Sogdian music and dance. Sogdians were merchants who controlled trade on the Silk road. From their homeland north of Iran they had set up trading colonies in China. Their masculine dance with high jumps was known as “the Sogdian whirl.” Its music was played by small ensembles comprised of harp, lute. flute and drums. These are shown on many sixth-century Sogdian sarcophagi, and wall paintings, in China.

Tang Dynasty music manuscripts have survived in Japan and China. It is from the first  millennium. By comparison, the oldest Middle Eastern music is relatively recent (the 13th century), and so is the Ottoman repertoire.

The concert imagines sounds of the ancient Silk Road, taking the listener from the caves at Dunhuang, continuing through the Middle East, and arriving in Europe. Musical instruments such as various versions of the ones being played today – harp, lutes, flutes and percussion – no doubt made the journey as well. 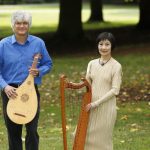 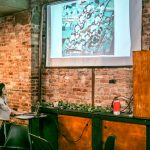 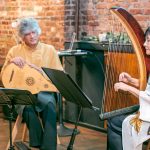 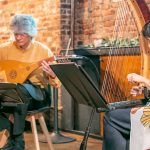 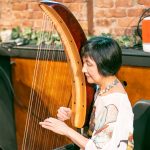 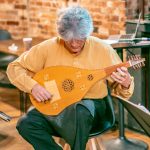 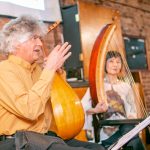 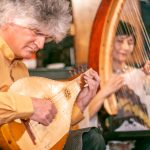 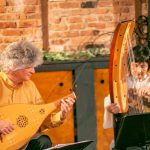 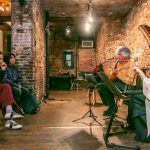 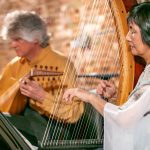 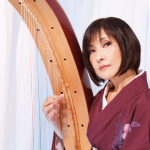 Born in Tokyo, Tomoko Sugawara began playing the Irish Harp at age twelve. She added the Concert Harp at sixteen, and graduated with a BS in harp at Tokyo University of the Arts. She studied cultural history at Seijo University in Tokyo and took up the angular harp (or kugo) in 1991. The kugo is the “mother of all harps,” played 3,000 years before any European harp.

She has given solo recitals on the kugo at major international venues, such as The World Music Institute (NYC), and World Harp Congresses (trice: Prague, Amsterdam, and Vancouver). Other places include The Early Music Guild of Seattle, The British Museum, Central China Conservatory of Music (Beijing), The Symposium on Historical Harps (Berlin), and Shanghai Conservatory of Music. She has given recitals at many US Universities: Columbia, Harvard, Pennsylvania, Princeton, Illinois, Indiana, Pittsburgh, and UCBerkeley. She has led her ensemble, Eurasia Consort, at The World Music Institute.

Tomoko Sugawara is also an active orchestra player on the Concert Harp, appearing with the Jacksonville and the Allentown Symphony Orchestras.

In September 2018 and Spring 2019 she will take up a position as Visiting Researcher at Shanghai Conservatory of Music. 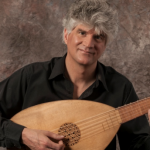 As a performer on lute, theorbo and Baroque guitar, August Denhard has appeared with Baroque Northwest, Seattle Baroque Orchestra, the Concord Ensemble, Chicago Music of the Baroque, the Indianapolis Baroque Orchestra, the Portland (OR) Symphony Orchestra, Camarata Pacifica Baroque, and many other ensembles specializing in early music. He has appeared at the Bloomington Early Music Festival and at the Ars Vocalis Mexico Music Festival in Michoacán and Sonora, Mexico. Denhard has given numerous solo recitals and is in demand as an accompanist of 17th century vocal music.

Starting in 1995 he had a leadership role in the Bloomington Early Music Festival, working first as education director, then as opera producer and assistant director of the festival. In 2000 he was appointed executive director of Early Music Seattle, and was instrumental in the founding of its baroque opera program, producing and/or performing in The Monteverdi Chamber Operas (2002), John Blow’s Venus and Adonis (2005), Monteverdi’s L’incoronazione di Poppea (2007), Monteverdi’s L’Orfeo (2009) and a double bill of Vecchi and Monteverdi titled A Day on the Town, A Night in Hell (2011).

Dr. Denhard has taught early music at St. Xavier University in Chicago, the Interlochen Summer Music Camp, the Indiana University Summer Recorder Academy, and at Ars Vocalis Mexico. He holds degrees from Peabody Conservatory, Northwestern University, and Indiana University, completing his Doctor of Music degree in May of 2006. His dissertation, Lute Realizations for the English Cavalier Songs (1630-1670): A Guide for Performers, has been published on line by the Lute Society of America.

His first solo lute recording, Cusp of the Baroque, can be seen and heard at http://cdbaby.com/cd/denhard/. His second CD with the Turkish udist/composer Münir Nurettin Beken, is titled A Meeting Place, and was released in 2010 on Sono Luminus. This disc inspired a new work for contemporary dance by Donald Byrd, artistic director of the Spectrum Dance Company in Seattle, which was performed on Spectrum’s Studio Series in 2012.