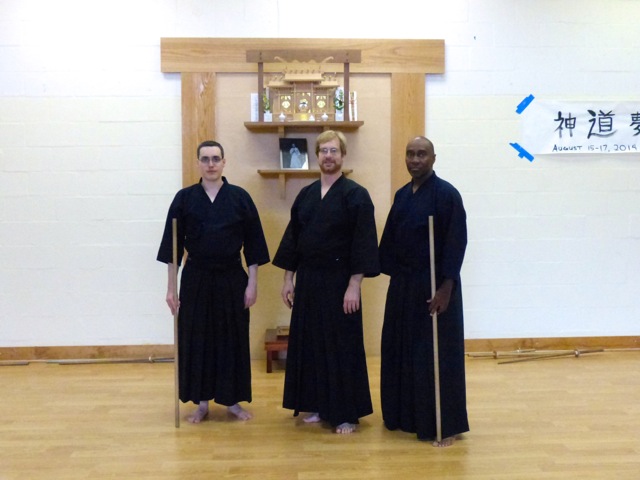 Last week, several students and I attended a jodo gasshuku (literally, a “training camp” – or seminar) in the Washington, D.C. area. Over the years, I have attended many such camps; in the US, in Japan, and in other parts of the world. Some were more successful than others, and I would rank this one as being very successful. But what made it successful? What made this camp worth attending? What can you learn at a gasshuku?

This year’s jodo gasshuku was the first one held in a number of years in the US. Since it was the first in awhile, it attracted nearly its full complement of participants. The maximum level was set at 50, and there were 37 participants the first day, rising to about 49 on Saturday, and declining to about 30 on Sunday, as various participants returned to their homes. The instructors included koryu jodo kata, with some relief being provided by some kenjutsu (paired sword practice) and tanjojutsu (walking stick techniques) as well. The curriculum reflected what the honbu in Japan frequently does for its gasshuku.

Given that many of the participants had only done some version of the standard jodo forms recognized by the Kendo Federation, the camp focused on basics – kihon (technique) and the first set of koryu kata. Some of the participants were familiar with a few of the kata, some with the entire set, and a few were advanced participants. Given the overall skill level of the group, I think the instructors made the correct choice – for my part, the training fit in well for the level of the Resobox class – I received some very useful corrections, my students worked on introductory level kata, and we all practiced the jodo kihon, kenjutsu and tanjo techniques together. As a teacher and jodo workshop leader, the gasshuku helped me refine my technique so as to better teach the workshop students, as well as giving me a lot of ideas for future classes.

But there is another aspect to the gasshuku experience that may not be as apparent. For example, in Japan, the honbu holds a gasshuku approximately twice a year. These invitation-only events last 4-5 days over a long weekend. The curriculum ranges from basic to very advanced, sometimes without much regard for the skill level of individual students. In short, students are introduced to a wide range of practice, and for relative beginners, it can be mind-boggling. But that is beside the point. After all, the majority of Japanese jodoka can get clarifications from their home-dojo instructors (even at the level of last week’s event, I, in conjunction with one of my jodo colleagues have been doing the same with my students). The larger function of a gasshuku is to foster a community of learners in a rarified environment. The simple, physical act of training together (and socializing together) allows people to connect and realize that they are part of a much larger world of budo. This is what is really being taught at a gasshuku. Last week’s event, which drew people from as far away as Montreal and Dubai, was a very good case in point. I am looking forward to next year already.