The title of the event, Far East Near East ~Hip Art Japan~, and the nature of this event resembling a happening, led to my recollection of the experimental artist group Hi-Red Center. Indeed, back in the 1950s and ’60s, Akesegawa Genpei and his friends of Hi-Red Center organized events in which diverse artists contributed to exciting happenings. And so this tradition seemed to continue on September 6, 2014 when Ken Hamazaki’s Red Tea Ceremony melded brilliantly with the video game inspired jazz of Fighting in the Streets.

Prior to the performance, there were more than a few members of the audience who were wondering what was going to happen this evening. The friendly environment and two drinks that were included with admission helped keep the audience curious yet cordial as we wondered what would happen next.

Before anyone knew it, the event begun, and all the chatter quickly died down. Two things more than any other signaled the commencement of the Red Tea Ceremony. First, the audience noticed that two striking silhouettes dominated the screen which had previously only showed a looping animation of spiraling swatches of RGB colors (along with their numeric values). On a baby blue sea, like a typhoon, some of the swatches would shoot out, almost as if they could emerge from the screen and leave their digital color splashed on the walls of the Resobox gallery; but unlike paint, the light of the flood gave way to the other colors on the screen. 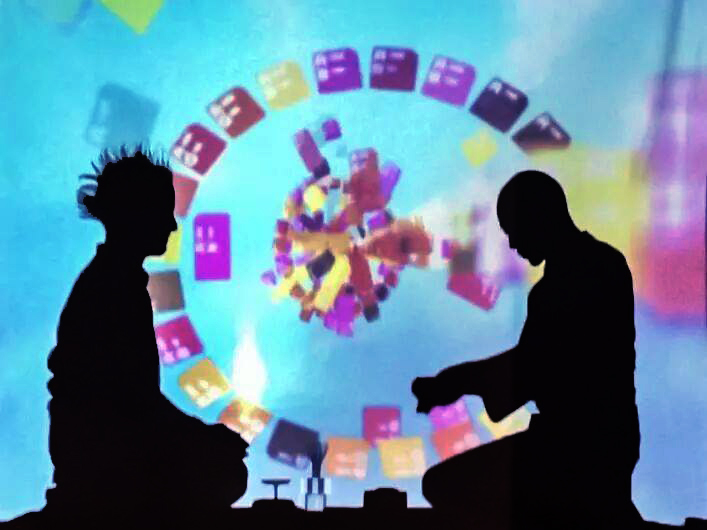 The two figures in profile were two people behind the screen, blocking the light of the animation to create two black silhouettes facing each other. The audience now realized how the tea ceremony part of this event would take place.

Ken Hamazaki offered a distinct shape with his bald head and strong facial features. It is as if his face were created for the expressed purpose of being seen in silhouette profile. Anyone who was unaware of the ritual of the tea ceremony would tonight be made very aware of the steps. While the guest was keeled still, with her arms at her side, the right figure on the screen that Mr. Hamazaki’s body created was at work, first pouring the tea from a thermos, then mixing in the herbs before serving the carefully prepared cup to the guest. After she drank it, using both hands to bring the cup to her mouth, and setting it back down, Ken would hit the cup to create a gong, which seemed to signal the end of her service. But the guest would not leave before the host offered some gift, which seemed to be some origami work that he folded in front of her. Following a deep bow they offered to each other, the guest then exited from the left side of the screen, put her shoes back on, and returned to the audience, perhaps a changed person.

This process recalls Plato’s allegory of the cave, in which Socrates tries to convince the rest of us that what we think of as reality is merely shadows on the back of a cave wall. Is the Red Tea Ceremony trying to tell us something similar? In watching shadows on a screen with the animated typhoon of RGB swatches, perhaps I am no closer to witnessing a Japanese tea ceremony, just as none of us are any closer to understanding the reality of Japan or the Japanese by simply taking a class, reading some literature, or watching a film. After all, wasn’t it completely possible that what I had seen was actually some elaborate shadow puppet performance?

A man in a kabuki mask who had been standing close to the screen all along then became more obvious to the crowd when he seemed to invite another member of the audience behind the screen to repeat the whole process. In this case, perhaps the looping animation, along with the looping repetitive music which may have been inspired by Steve Reich’s minimalist pulse music, was perfectly appropriate while Mr. Hamazaki repetitively performed the same motions of the tea ceremony. Perhaps the only way to discover the platonic truth beyond the shadows was to traverse beyond the cave, or in this case the other side of the screen, to find the relation between the shadows and the reality of what we experience.

In that case, one might be quickly overwhelmed by the isolation from the rest of the audience. Suddenly, after being a member of the larger community who had the shared experience of the shadows on the screen, now the new tea guest is on the other side of the screen. No longer would she see shadows, but was instead face to face with the Socratic Mr. Hamazaki who might reveal the truth of this happening. In this case, such truths can only be arrived at one at a time, on an individual basis. 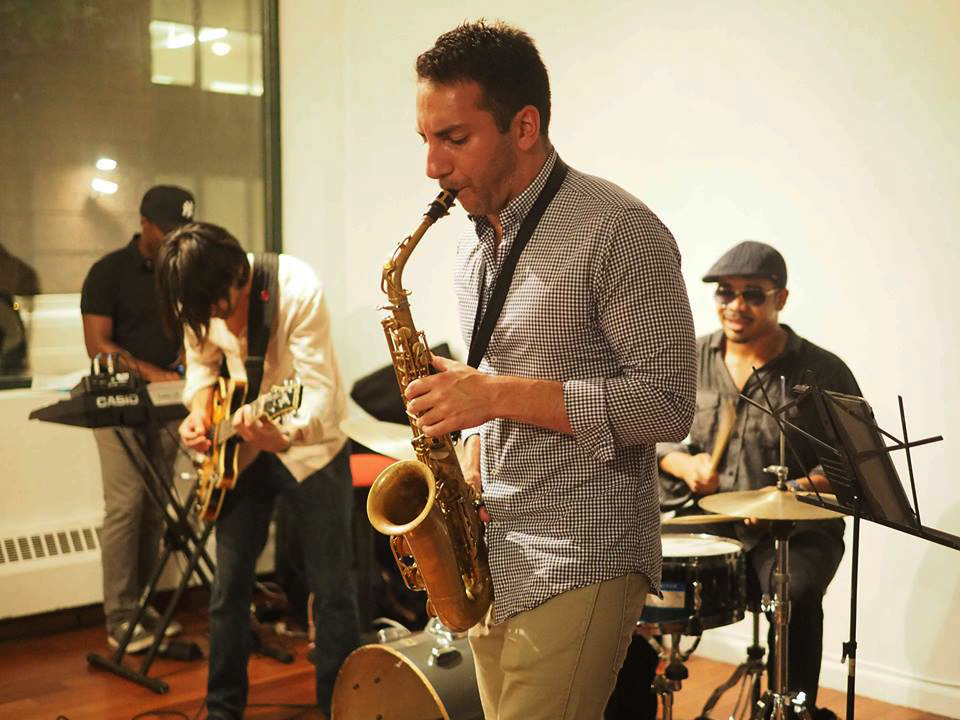 If the first half of this event was about individuals discovering the platonic truth behind the shadows, one at a time, then the second half was possibly about the collective community of the audience recognizing their shared experience and memory, and how that similar past history might bring us together to create something new. If this was the case, Mr. Hamazaki relinquished his role as teacher, prophet, or philosopher to the jazz band Fighting In The Streets. The transition could not have been smoother, when from behind the drum kit Norman Edwards Jr. added a subtle hi hat and crash cymbal to the Reich-like pulse music loop. Soon after his own visit beyond the shadows, Max Jacob’s bass guitar contributed a drone-like grove, and then with the Sean Richey on guitar, Alex Lopez on saxophone, and Phil Lewis on keys, the transition was complete: from the trance inducing repetition and loops, to the high energy grove and riffs of old video games.

Those in the audience who were sitting now found the need to stand in order to better receive the beats and melodies originally found in Nintendo’s Streets of Rage video game, Super Mario Bros., Mega Man, and Sega’s Sonic the Hedgehog. While most jazz fake and real books offer lead sheets to the classic standards, Fighting In The Streets, discarded those books in favor of childhood memories of melodies and harmonies that permeated the collective youth of the video game playing generation of a certain age, and revealed those games to be amazing sources of chord changes, licks, and possibilities that few jazz musicians, artists, and human beings have mined. 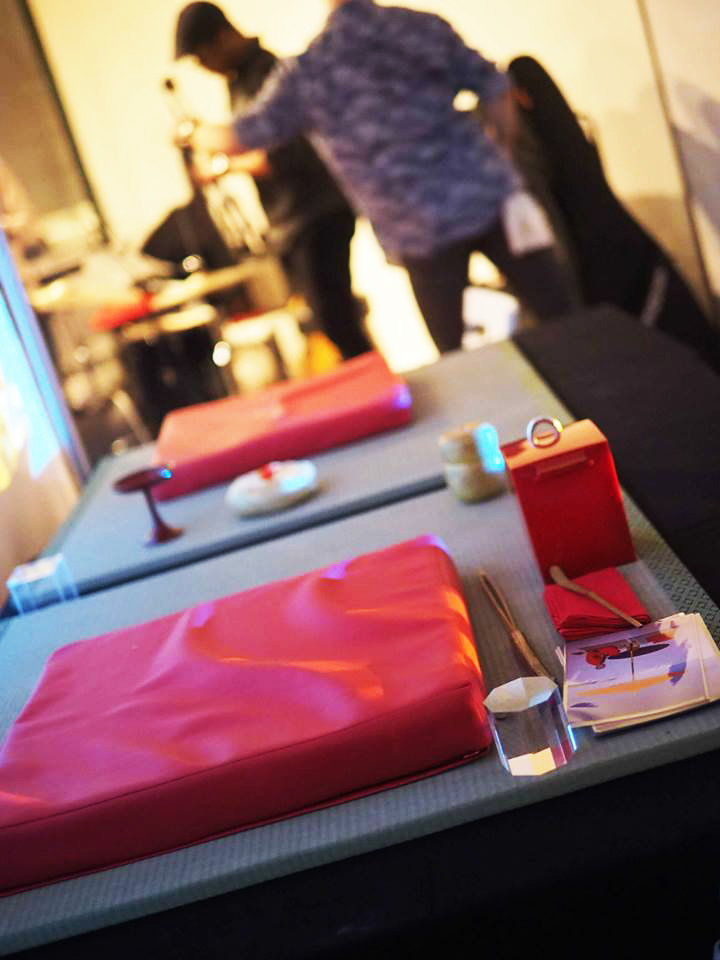 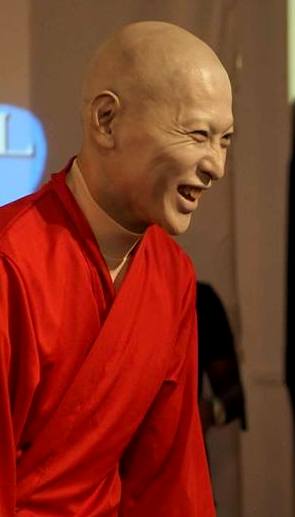 The connection between Mr. Hamazaki’s calm, quiet, and contemplative tea ceremony and the high energy, up-beat jams of Fighting In The Streets was now clear. While the band played jazz renditions of video game themes, the animated typhoon of colors continued to play on the screen, minus the tea ceremony shadows. The interpretation of the animation as a video game, complete with seizure risks, as well as metaphysical questions emerged. Aren’t all the ritualistic repetitions of our life just a video game we’re playing, where we are just trying to find new ways to solve the problems in front of us, despite the fact that some answers that have been with us since youth might take us to new places? Perhaps, we might find a wise philosopher to guide us beyond the cave of shadows, but then it is as a community that we stand together, and dance. 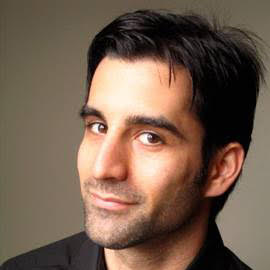