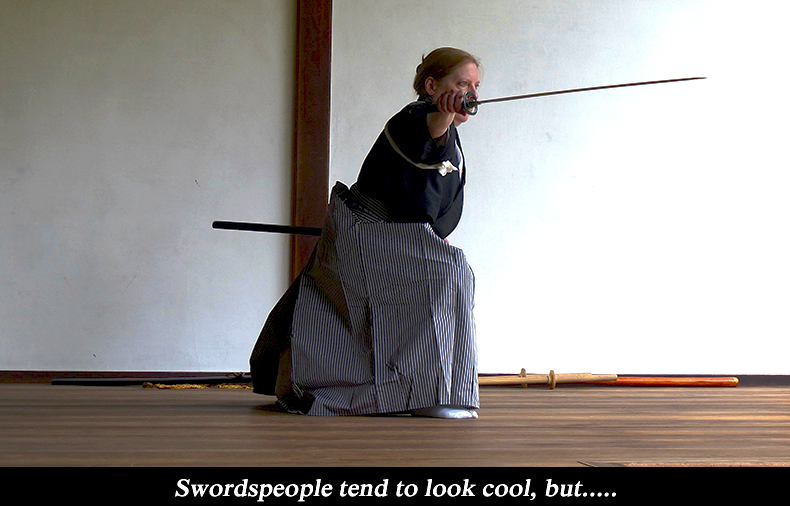 Everyone loves the romance of swords.  Swords look cool, whether plain or highly decorated, from any of the many world cultures that produced them.  Swordspeople tend to look cool, too, in a variety of different ways – whether in dignified statues and paintings, or as movie swashbucklers, or in photos of Japanese guys in their grandfathers’ armor.  Fight choreography, in which the assailants flail at each other – in serious films or plays, or not-so-serious, like the final duel in Men in Tights, or the quasi-serious assault by pudgy Samwise Gamgee in The Lord of the Rings, are exciting and seemingly dangerous.  It’s as though swordsmanship is badass by definition.  But is it?

Japanese swordsmanship, like other forms of swordsmanship, is very different from the cinematic kind.  Students learn techniques through performing kata – patterned, theoretical scenarios of attack and defense; for example, how to stop an opponent’s attack from the front, from the left, from the right, even from behind.  Multiple opponents?  Sure, sometimes.  Paired kata, using wooden swords, teach timing, and an element of courage (what do you do when your partner comes at your head with a sword?  Think fast!  Or – don’t think at all).  But unlike unarmed martial arts, like karate or judo, there is no free-sparring – not even with wooden swords.  The atmosphere in a Japanese sword class is definitely serious, but it is also relaxed – relaxed as in that the students must concentrate so deeply, the affairs of the outside world seem to temporarily disappear.

“I love swords,” a prospective student once told me.  “My favorite movie is Kill Bill.”  Right away, I knew two potential paths for this person – either she would stay in the class, and Kill Bill would lose a lot of its appeal, or she would quit after the first class, illusions intact.  She chose the latter.  I often wonder why this is.  I make no promises with regard to the study of swordsmanship – the training is exacting and meticulous.  The sense of concentration involved can lead one on the path of meditative mindfulness, or simply be a relaxing, fully-engaging, definitely physical, activity.  Practitioners are to some extent walking the path that others have walked for literally hundreds of years.  But badass?  I’m afraid not.

Unfortunately, this non-badassedness can lead people to the opposite conclusion – that Japanese Swordsmanship is too all-consuming and time-consuming for ordinary people.  I can assure you it’s not.  While the people who think that the practice is going to turn them into anime heros will surely be disappointed, for people who are looking to connect with history as well as a traditional culture that is still very much alive, Japanese swordsmanship is an awesome practice.  I can think of no better way to get a decent, low-impact workout and learn a few new things, too.  Forget “brain games” – as the Greeks knew, both mind and body need to work out to stay strong.  Japanese swordsmanship offers all of the above, and more.

Remember, badasses eventually get their comeuppance (and if you don’t know that, you haven’t seen enough movies).  Swordspeople, on the other hand, just get better with time.