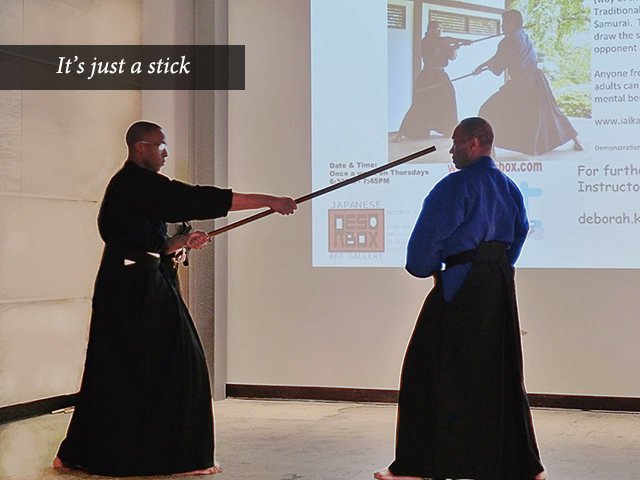 The tsue (the “jo” in jodo – stick fighting) is a stick made of hardened white oak.  Unlike other pole weapons, it has no designation to show which end is which.  It has no line or string down one side to represent the back of a sword, like a kendo shinai.  It is utterly featureless.  It’s just a stick.

Some people try to make more out of it than it actually is.  We hear that the tsue is the shaft of a broken spear, or glaive, or halberd; a makeshift weapon of last resort, to be used after the “real” weapon has been somehow damaged.  But the reality is that the tsue is just a tsue.

The simplicity of the tsue, however, is also its greatest strength.  Having no distinguishing features at all is actually a great advantage.  The jodoka (a person who practices jodo) does not need to worry about which end is which.  There are no rules that say that it needs to be pointed or held one way or the other.  This simple versatility means that the jodoka does not have to look at his weapon at all in the process of wielding it (a good idea when your opponent is swinging a sword at your head).  Stick-fighting techniques are done both left- and right-handed.  The hand position varies, too.  We have honte no kamae (very much the same as holding a sword) and gyakute no kamae, in which the upper hand position is reversed.  Both hand positions have advantages for the jodoka.

Since the tsue’s only advantage over a sword is its superior length, techniques can be performed while the jodoka is advancing or retreating, depending on the situation.  Despite some of the lore, stick fighting is not just defensive; it can be offensive when the occasion requires.  This came as something of a surprise to me, as a beginner.  There are times when the jodoka engages with a sword-wielding opponent, and she attacks! (And in the scenario of the kata, she wins!)

At the same time, this versatility carries its own burden – I won’t lie; I find jodo to be an incredibly challenging practice.  In the first place, the only effective way to learn stick fighting is with a group of like-minded people, which is not always easy to find in an over-stimulated and overstressed city like New York.  Secondly, that versatility of hand positions and tactics seems to result in too many choices – which hand position, which strike?  And the truth is, while the kata is what you should be learning, there is often more than one way to resolve a hypothetical situation where a longish stick is pitted against a sword.  It’s the job of the jodoka to remember which one to apply in a given kata.

In fact, the tsue is so versatile, and the possibilities for attack and defense so numerous, it sometimes is hard to remember that it’s just a stick.