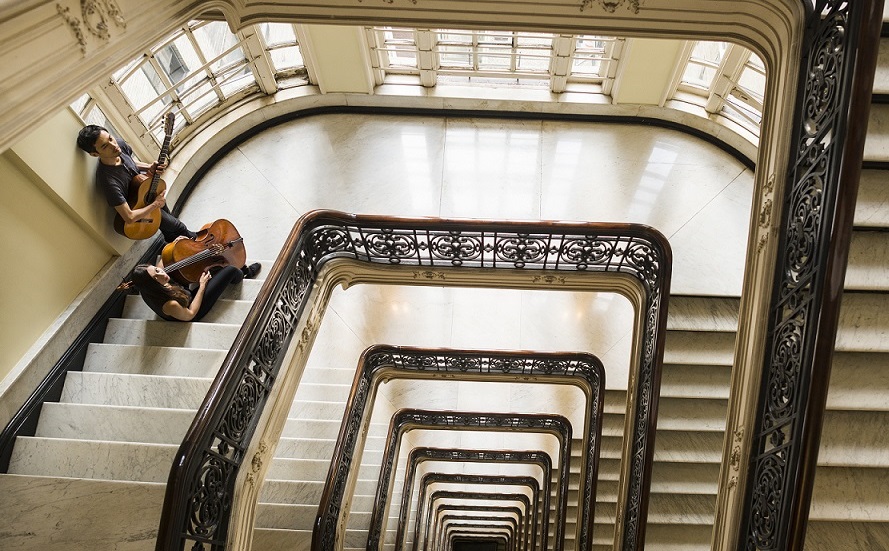 With inspiration from the art of Taniguchi Hisami and the concept of the equinox, Duo Anova presents an innovative program of new works for cello and guitar. We hope to explore the transition between classical repertoire and contemporary music. Our unusual instrumentation offers an exceptional experience; it opens up a listener’s mind to a new dimension of textures and sounds unique to cello and guitar.

Duo Anova has recently performed at the Composer’s Voice 100th Gala Concert, Saint Peter’s Church, 662 Center Sounds Concert Series, and Culturefix. In addition, Duo Anova has recently accepted positions as Visiting Artists through the Louis Armstrong Department of Music Therapy Program. They have a weekly residency every Tuesday at Roosevelt Hospital on 59th and 10th Avenue.

On January 27th, 2014, the duo will make its debut at prestigious Carnegie Hall presented by Composer’s Voice. For more information, please click here. 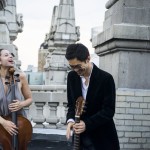 Duo Anova is a cello and guitar duo based in New York City. Members Susan Mandel (cello) and Kenji Haba (guitar) met in 2012 and immediately bonded over their passion for contemporary music and their animated sense of humor. The rare instrumentation offers an exceptional experience; it opens up a listener’s mind to a new dimension of textures and sounds unique to cello and guitar.

Duo Anova is committed to expanding their repertoire for this unique combination and performing with virtuosity and intensity. Award winning composers and emerging composers, such as Goya Masatora, Michael Kropf, Andrew Middleton, Castilla-Ávila, Inna Buganina has written music for Duo Anova. In 2014, it will participate in Vox Novus’s Fifteen Minutes of Fame series, featuring world premieres of fifteen one-minute pieces written especially for the group.

Kenji Haba is a guitarist who heralds a new direction for classical guitar through his insight and work with the coloration of sounds, as well as through bringing new formats to the landscape, including the innovative guitar-cello ensemble. He is well known for his interpretation of Toru Takemitsu, his performances having been described as an “ideal match for Takemitsu’s music” by Fanfare. He is also an active performer of contemporary music, with over 20 pieces of music written for and premiered by him.

Susan Davita Mandel is a native of New York. In her classical training, she has studied with cellists Marion Feldman and Dr. Frederick Zlotkin. She has attended Domaine Forget and Bowdoin International Music Festivals where she studied with cellists Thomas Wiebe, Carol Sirvois, Matt Haimovitz, and David Ying. Susan, with her piano trio, was selected to perform the American debut of Robert Delanoff’s Trio for Clarinet, Cello and Piano at Weill Recital Hall within Carnegie Hall as finalists of the AMTL Young Musicians concert series.