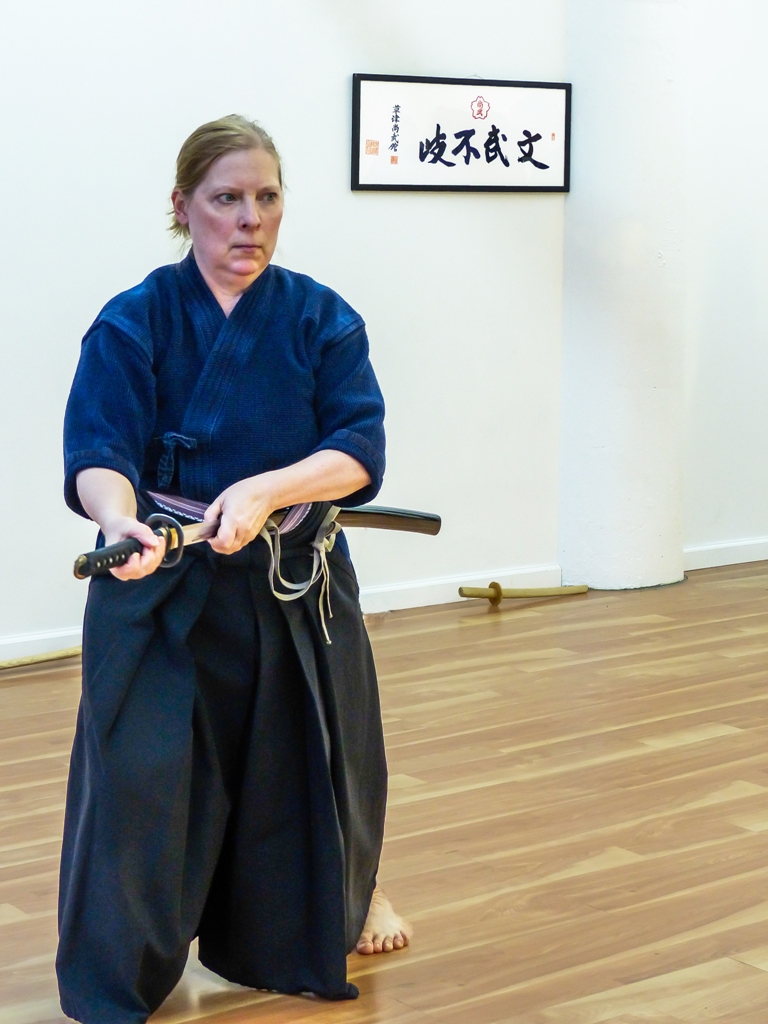 Many years ago, I taught swordsmanship at a dance studio. Like most studios, one wall was covered with mirrors. One day I noticed that one of the new students, who was rather good-looking and (I heard) rather successful with women, had taken to admiring himself during practice. He was not checking his posture or technique, he was posing – changing his position to see himself to his presumed best advantage.

I thought this was funny, but at the same time, not very conducive to good practice. So I decided to try an experiment. Generally speaking, we practiced our technique and forms facing the mirror wall. I had the entire group turn around so they were facing the opposite wall. As I expected, the new guy had trouble performing the technique without the approval of the his mirror image. What I did not expect was that most of the rest of the group also had a similar problem. The mirror, intended to be a tool for learning, had become a crutch.

Traditionally, martial arts in Japan were not taught in the presence of mirrors. Students were instead expected to learn by watching the teacher and the senior students and trying to match their movements, not by watching themselves. Matching the movements and timing of senior practitioners is the best way to learn the mechanics of a given kata. But learning the mechanics of a form, as difficult and complicated as that might be, is just the beginning. Solo kata in swordsmanship are not just mechanisms for learning techniques. Every solo kata also has embedded in it a scenario of attack and defense – a story, if you will. For example, the story of the first kata in Muso Shinden ryu, Shohatto, is that you are seated opposite someone who makes a move to draw his sword. You react by rising and drawing more quickly than your opponent, cutting him across the face. You follow up by repositioning the sword overhead and moving closer to cut him down. Afterward, you flick the blood off of the sword and return it to its scabbard.

An important element of going beyond the mechanics of the form and the story, as outlined above, is sighting your opponent; i.e., looking in his direction and fixing your gaze wherever he may be. Many books on swordsmanship simply say that the beginning iaidoka should fix her gaze towards the floor two meters ahead, but once the mechanics of the kata become more familiar, her gaze must be leveled at her imaginary opponent. When performing the variations on Shohatto, where the opponent is threatening you from the left, right, or from behind, the first thing that happens as part of the form is to shift your gaze to the source of the threat. This technique is called metsuke.

Without metsuke, there is no life, no sense of intensity, in the form. There is no focus, and without focus, the form has no meaning. Once a beginning student has learned the mechanics of a form, metsuke opens the door to the next level of understanding. Metsuke creates a sense of concentration, of being “in the moment” of the kata being performed. Think about it – that sense of immediacy and mindfulness is fundamental to the effectiveness of the techniques that we learn through the kata. Without it, the student is an automaton, performing the movements (however skillfully) but never getting beyond minimal technical competence.

You can’t develop metsuke by watching yourself in a mirror. Instead, you have to pay attention to what is actually happening in the kata, and react accordingly. Some of the students who became confused when I turned them in a different direction reoriented themselves, and some did not. And the cute guy? He left when he figured out none of the women in the dojo wanted to go out with him. Oh well.