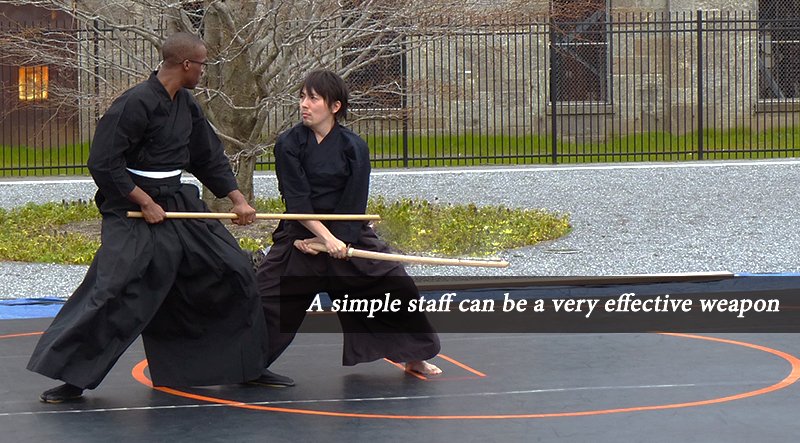 How do you stop a swordsman?

For every action, there is an equal and opposite reaction.  I learned this maxim in school, and to a certain extent (on the physical level at least), it has always proved true.  In the case of koryu budo (old-style martial arts) any number of styles existed in the old days that included techniques created specifically to counter the techniques of other styles.  Very often, these techniques were shrouded in secrecy, but there is one set of old style techniques that stands out – stick fighting (jodo).

Jodo developed alongside the rise of the samurai for a fairly simple reason.  As the samurai became the de facto rulers of Japan, members of the various clans realized they needed a non-lethal means of control for clan members who misbehaved.  But what weapon could seem fairly innocuous and still be effective against a person armed with a sword?  The answer was a staff, approximately 4-1/2 feet long and approximately 1-1/4 inches in diameter, made of hardened wood.  Legend says that a lone samurai, Muso Gonnosuke, came up with the idea of the wooden stick as a weapon to be used against a swordsman.  Other stories suggest the techniques developed on the battlefield, when the shaft of a broken spear or glaive was taken up by a resourceful warrior and used for defense as well as offense as a personal weapon.  Perhaps all of the stories are true; we just don’t know.  What we do know is that this simple staff can be a very effective weapon.  In fact, it is so effective that Japanese policemen to this day learn to use the modified tsune (stick) as both an offensive and defensive weapon.

There are a number of styles of jodo, but the most popular one is Shindo (or Shinto) Muso Ryu.  The style dates from the 17th century, and has been passed down, largely in police ranks, to the present day.  We practice this style as well.  Though one can practice stick-fighting techniques in isolation as solo kata, the most effective method for learning jodo is in paired exercises, in which the jo person squares off with a partner who uses a wooden sword.  Since the object is to learn how to effectively use the stick, the “swordsman” in these kata is always the loser of the encounter.  And while the stick techniques are generally non-lethal, it does not take much imagination to figure out that a slight change in distance, timing or target would result in serious injury or death.  This puts jodo on the same level as swordsmanship; and, in fact, a number of people who practice Japanese swordsmanship also study stick fighting.

This practice is not as well-known in the U.S, though there are some dojo here who incorporate stick fighting into their curricula.  In some ways I suppose it’s not as cool as swinging a sword, but I like to think of practicing stick fighting as keeping a balance – for every aggressive attack by a swordsman, there is an effective counter by a person walking softly and carrying a longer stick!