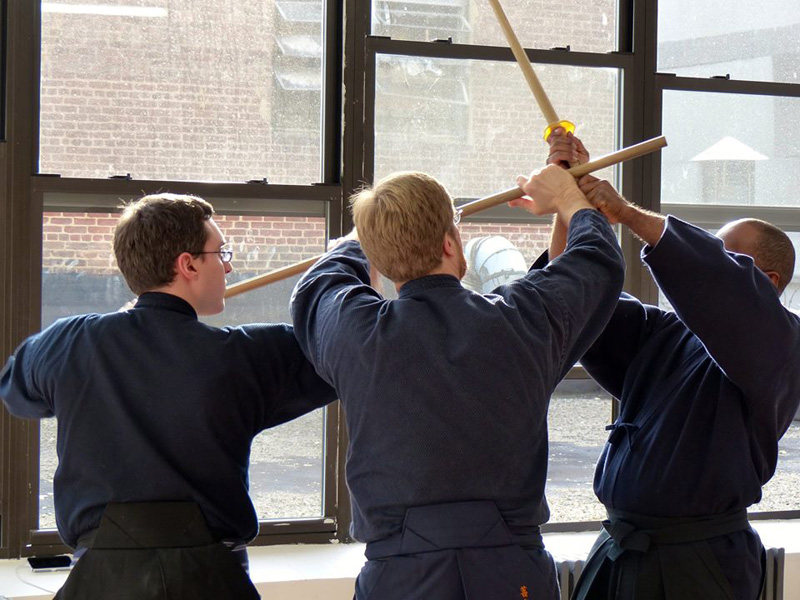 As I watch new students trying to get comfortable wielding swords and sticks, I am reminded of something my teacher, Otani Yoshiteru, once said: “All you need is 10 minutes each day. That’s all.” What he was saying was that if I wanted to get better at either iaido or jodo, all I needed was 10 minutes each day to practice, in order to improve my technique.

I ignored this simple advice – for years. It’s not that I didn’t practice on my own. I did, especially when I first started training. I lived alone in a small apartment. I would push the furniture aside in my tiny living room and swing not only a bokuto (wooden sword), but a practice sword around. When I finally acquired a real sword (a gift from sensei), I was so afraid of it that I would only use it at home, at first. I was right to be scared – I accidentally cut my sofa with it, doing more damage in a fraction of a second than my cat would do in two years.

But I was not following sensei’s 10-minute advice. I was practicing once a week or so, when I had time, sometimes for 20 minutes, sometimes for much longer. Eventually, I even rented studio space by myself, something I still do now, from time to time. My sempai in the dojo stressed the idea that hours of solitary work as the only path to real improvement. One even said he sometimes spent an entire weekend day – about six hours – just practicing!

So the idea that 10 minutes of practice could actually lead to some sort of real improvement in technique seemed faintly ridiculous, and not just to me. In addition, I was convinced somehow that I was so poor at swordsmanship that 10 minutes could not possibly save me. I remember thinking that without a proper warm up and cool down, I would simply feel frustrated, practicing for only 10 minutes. On top of all that, who even has ten minutes every day? Even now, I am supposed to do 10 minutes of physical therapy exercises twice each day. I don’t need to tell you how that has worked out.

Time went on, and, even as my skills developed, I often felt I saw holes in my technique. In particular, my grip never seemed to be quite right. I have small hands and short fingers, and the grips of most swords or bokuto are too big for me, so I have to work harder to have a proper grip. I have a very good memory for kata (who knew?), and I developed methods for sighting imaginary targets in order to improve kata practice, but I was still nagged by what I felt were weak basic techniques.

After I got married, it did not take long for my husband to lay down a rule: “No swords inside.” There went my serious at-home kata practices, with my cat as the only audience. Suddenly, 10 minutes of practicing basics seemed like a good idea, so I tried it. And it worked! My grip improved, and I developed better control over the sword (according to the new “house rules”, a wooden sword only). I felt stupid for not following sensei’s advice earlier. As he was about a lot of things, he had been right all along.

I still go for long periods where I only practice a few times a week on my own, in addition to teaching classes. Life gets in the way, even though I shouldn’t let it overtake me. Writing this blog post, in fact, is serving as a reminder. Tonight, I will recommend 10 minutes of practice each day to my new students, and I will also emphasize it to the others. I just hope it does not take as long for them to pick up on the wisdom of that advice as it did for me.