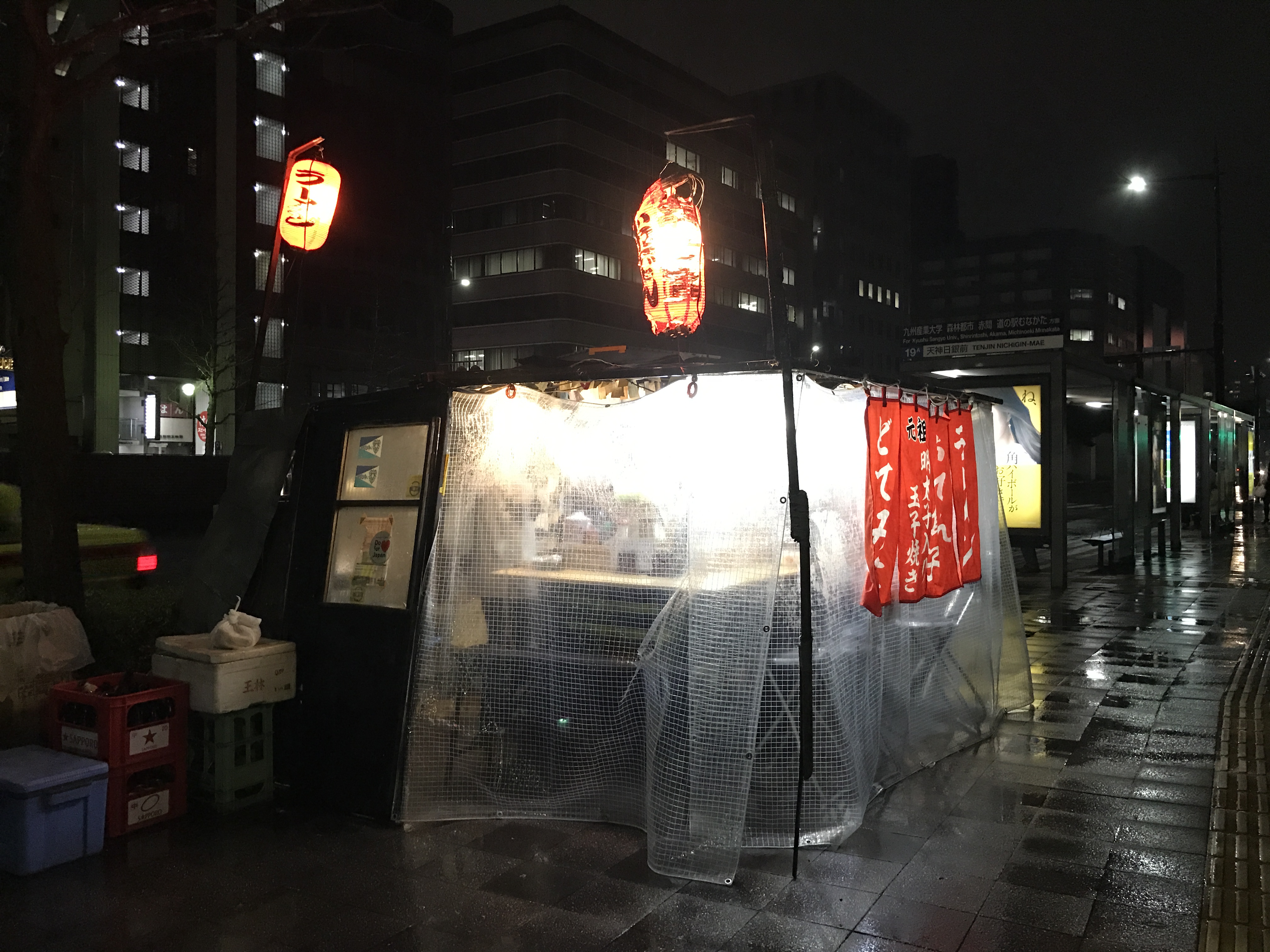 I could only describe the experience using some obscure similes:

The experience I am talking about is eating in a Yatai.

Yatai is basically equivalent to a food cart, but I don’t really like that translation because it’s more like a tiny (and magical) restaurant on wheels.  They are common to pop up during omatsuri, or spring and summer festivals across Japan, but they make regular appearances in some cities and towns.

My mother told me a story of when she was twenty years old—the year that Japanese young adults turn legal.  She went to a Yatai after a night of drinking and before hopping onto the last train of the night to head home.  She told me that she peeled back the little red curtain that read: “Ramen” and took a seat on the rackety black stool to order a bowl of hot, oily ramen.  She’d never forget the smell or taste of that bowl of ramen, she said—it was perhaps the best in her life.  The chilly breeze would hit her back that was exposed to the cool air outside, but she didn’t care and slurped the noodles while chatting with the older businessmen or fellow drunk ramen slurpers.

So naturally, I determined to go to a Yatai myself.  Unfortunately, they’ve become rare these days in Japan, and I’d only seen one or two with my own eyes.  I had heard though, that they are still quite common in the southern city of Fukuoka, and when my boyfriend suggested that we stop by Fukuoka during our two-week trip across Japan, I was all for it almost exclusively for the Yatai experience. 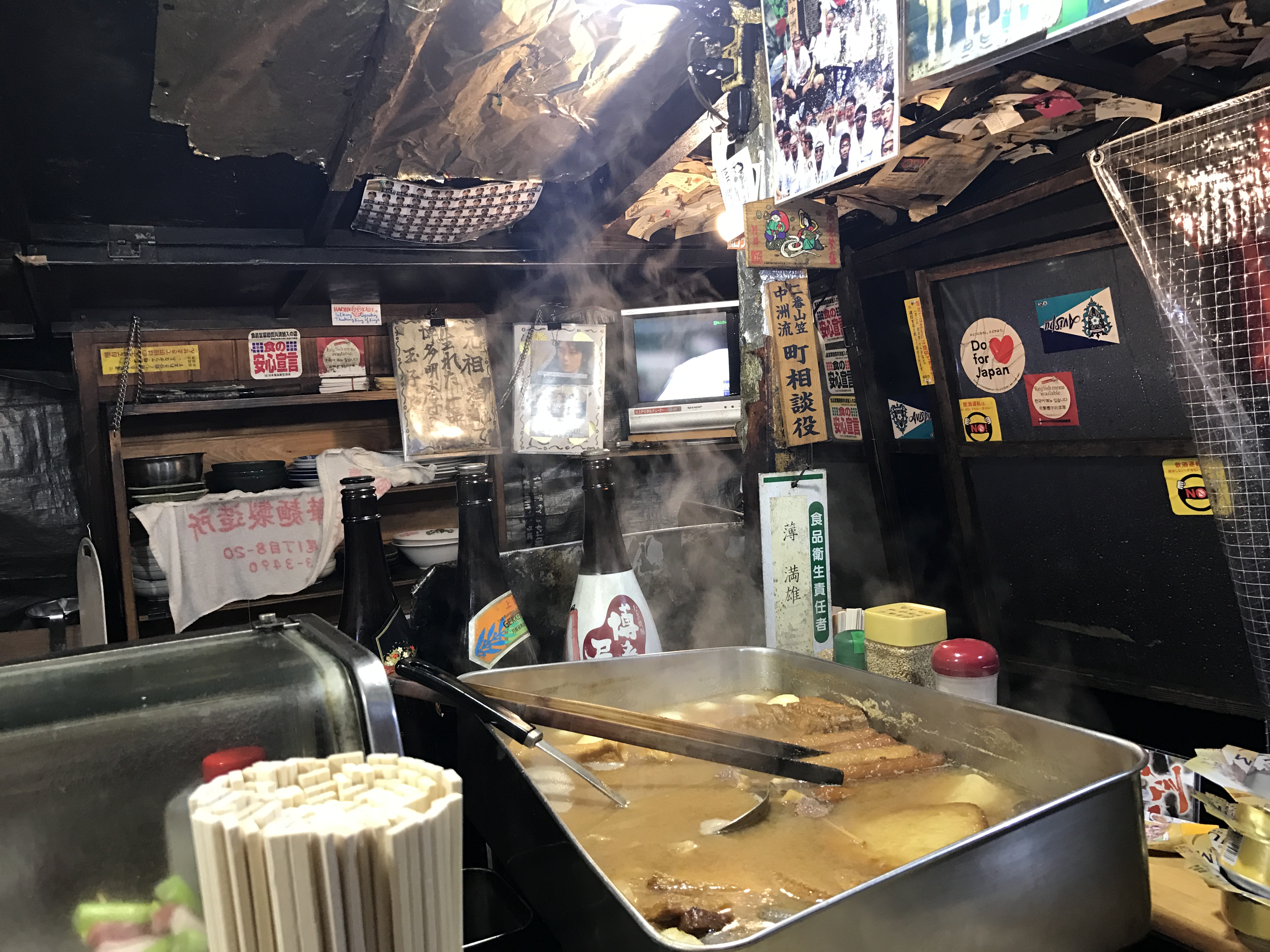 When we got to Fukuoka after dark, it was raining.  I was worried that there wouldn’t be any Yatai out in the rain, but thankfully, there were a couple that were still open.  We walked in the rain, getting drenched because of course we had both forgotten our umbrellas back at the hostel.  The street that supposedly had many of the famous Fukuoka Yatai didn’t quite match the image I had in mind.  I had run a few Google searches on it prior to the trip, and there was supposed to be countless stalls crowded together with open seating, not just a couple encased in a translucent plastic cover.

From the two open Yatai that we could spot, we chose the second one.  I have to admit, it took a bit of courage to peel back the plastic casing and say hello to the people inside.  I asked if there were any seats available and the owner, or master as they like to call them in Japan, welcomed us in and told us to sit down.

Luckily for us, a big group of about seven were just leaving, so we switched to the stools in front of the counter instead of on the side.  The place was heated, free of rain, and smelled like warm, home cooked meals.  I could hear the patter of the rain hitting the metallic roof above us.

“So, what will you be drinking tonight?” asked the master.  I asked him for a beer, and he handed us a can of tall Asahi with a big steel mug.  While we sipped on the beer, the master made friendly conversation.  He asked me how I knew Japanese, what we were doing in Fukuoka, what we thought of Japan—even what I thought about the current president.  His wife, who was co-owner and co-chef, sat on the side and smiled the entire time.

First, we ordered a bowl of oden.  Oden is essentially an assortment of radish, potato, konyaku (jellies made from a type of potato), various fish cakes, and hard-boiled egg slow-cooked in a pot of dashi broth.  It tastes a little different in every Japanese household, but it’s something that Japanese people love.  It reminds me of home, because it’s not really a dish you’d normally eat at a restaurant.

The master’s wife scooped up one of every ingredient in the broth into an undecorated bowl and put it on the counter in front of us.  She gave us each wooden disposable chopsticks and smiled.  I tried the daikon, or radish first, because it soaks up the broth the most and you can really taste the flavor of the oden by eating it.  It was soft enough to break apart with chopsticks, and when I took a bite, I involuntarily let out an mmm noise from my throat.  It was as though every pallet on my tongue was satisfied.  It was a perfect mixture of savory and sweet, and I could tell that it was cooked for a very long time.  I looked up at the smiling chefs in front of us and told them that it was delicious.  The master’s wife thanked me, so I figured she must have cooked it.

It only took us a good ten minutes to finish the bowl of oden, so I asked the master for a bowl of ramen next.  I was really looking forward to this because ramen from Fukuoka is famous.  It’s called Hakata Ramen, known for its thin noodles and fatty, thick soup.  As we were ordering, two middle-aged men entered the Yatai and sat down next to me. 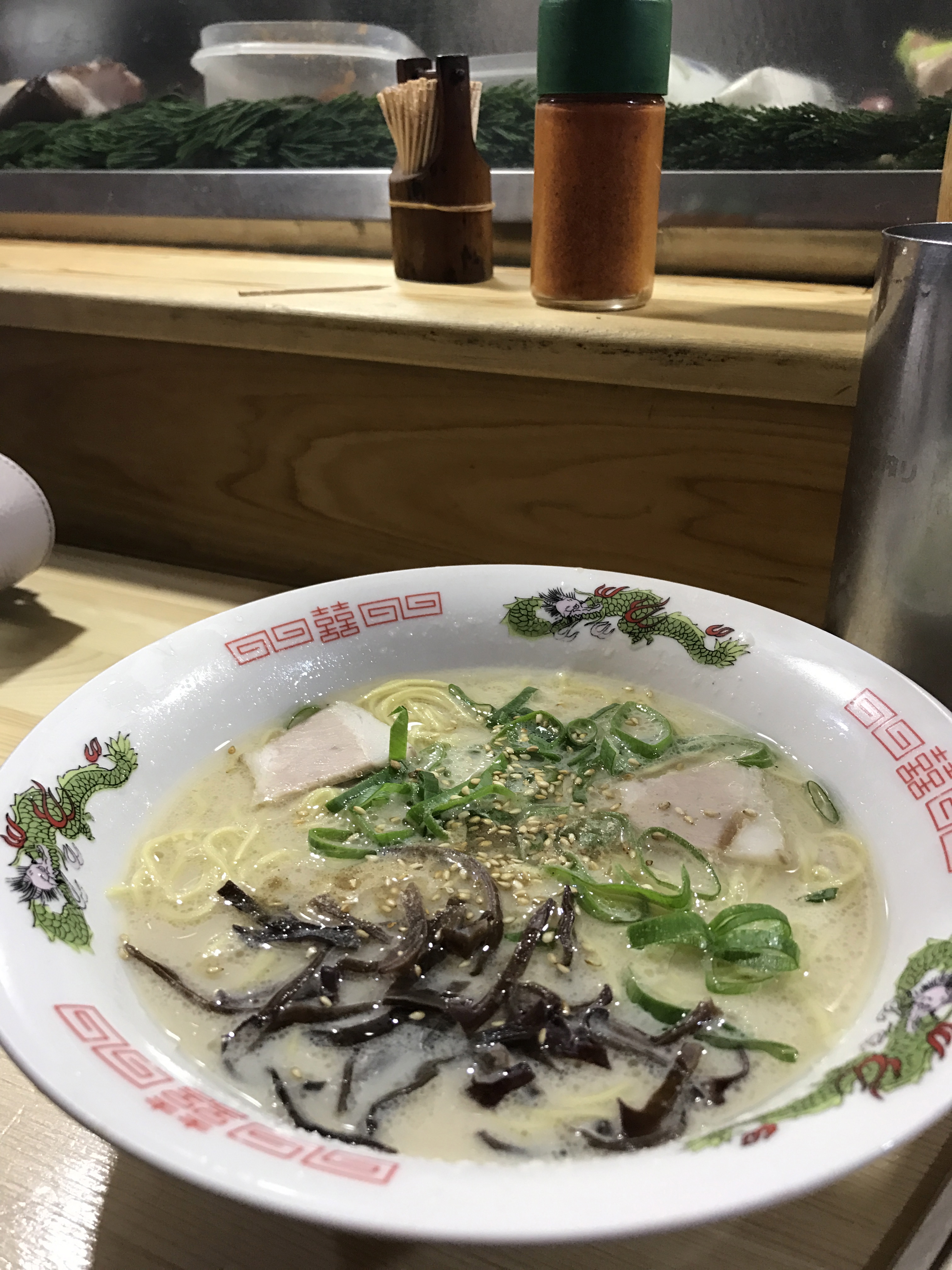 They turned out to be businessmen on travel.  They were originally from Kyoto, but had come for a meeting with the company.  Their faces glowed red from whatever drinks they had had before this, and they were jolly and chatty.  One of them tested his English with us, and the other teased and laughed at his friend.  They stressed that Fukuoka had some of the best food in Japan and were proud of us for coming to a Yatai instead of eating in a restaurant like most foreigners would do.  I told him that it was one of my goals in life to eat in a Yatai and he chuckled.

The ramen was eventually served, and the smell alone put a huge smile on my face.  The pork soup was indeed so fatty that I couldn’t even see the noodles below the surface. The soup was topped off with konbu, scallions, thin slices of chashu pork, and sesame seeds.  I took a photo to send to my mother for old memories’ sake and began to eat.

Again—it was hard to believe that something could taste so perfect.  The thin noodles tangled with the fatty soup and the konbu and scallion added a different texture to the soft noodles.  Every time I swallowed, my stomach seemed to scream “more! Give me more!” so I just kept on going.  The dragons drawn on the sides of the bowl stared judgingly as I slurped the entire bowl in record time.  The master looked flattered by the way we ate and smiled.

Eventually, the jolly businessmen left and we finished our beers.  When we asked for the check, I felt a strange feeling of sadness—like the feeling I’d get when my mom told me it was time for us to go home after spending the day at my cousins’ house.  The fun was over, and it was time to go head to reality.  After paying the bill, we peeled back the plastic to step outside into the cold rainy night.  The master and his wife followed us out in order to bow and thank us for coming.  We waved and began to walk, but the master’s wife told us to wait.  She walked over to their van and handed us an umbrella.  I told her that it was okay, that our hostel was very close by, but she insisted.  Her kindness made my heart swell and we took the umbrella.  As we walked, we turned back at least twice more to wave goodbye.  Eventually, they went back into their Yatai, but I felt like I could and would never forget them.  It sounds sort of silly, and I’m not really a sentimental person, especially when it comes to owners of a restaurant that I had one meal in, in a city I’d never been to before.  But my heart felt as full as my stomach that night.  I felt like I had gone home. 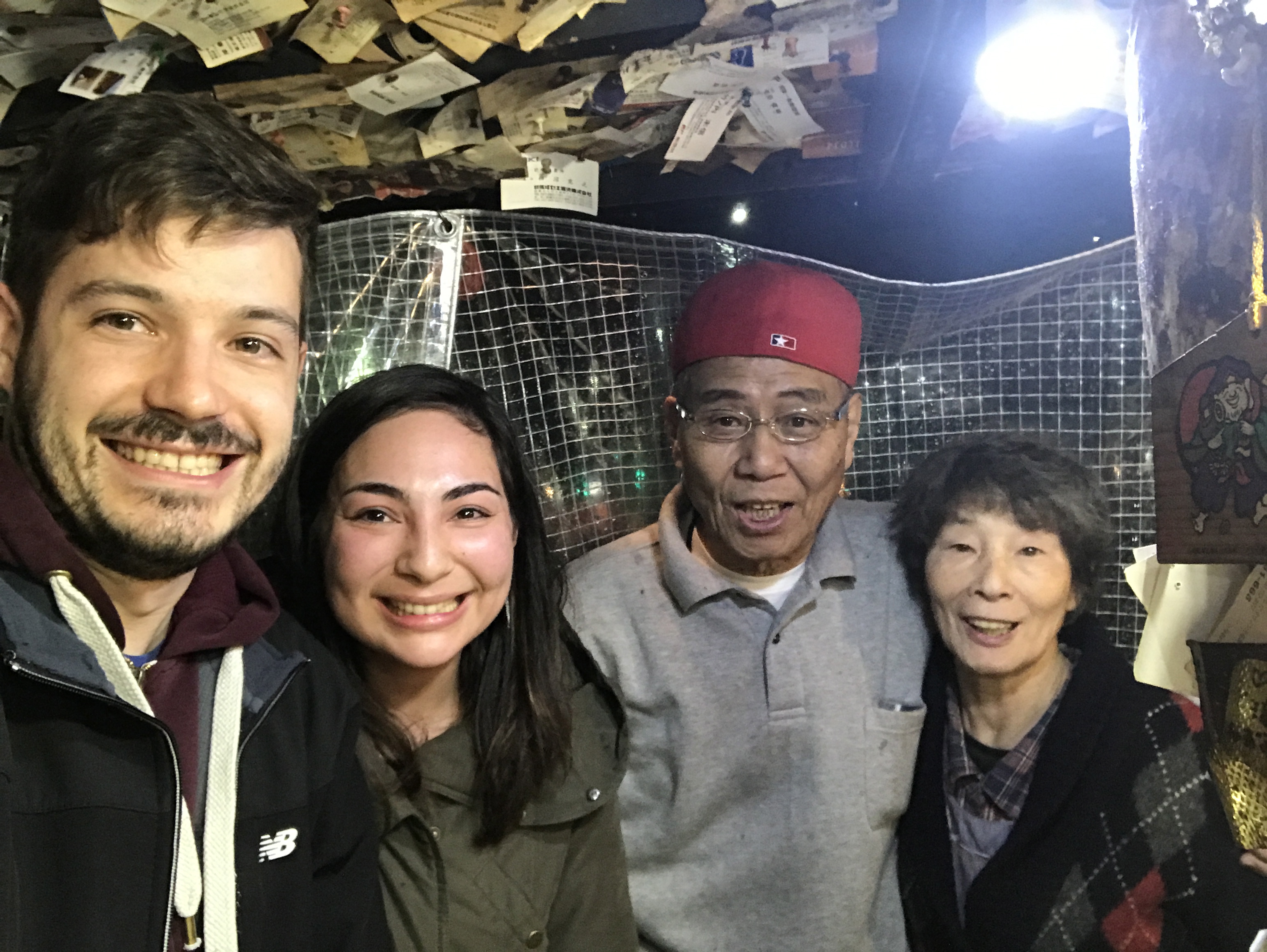