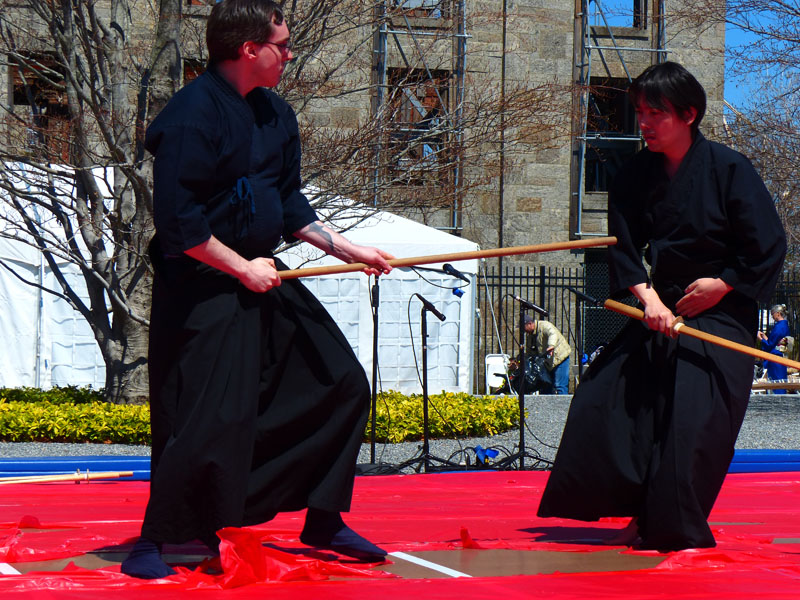 I often wish I could videotape new students their first day in jodo class. As I have said before, even though the jo is “just a stick,” learning to use it properly in jodo is the work of a lifetime. Even though the stick is utterly featureless, I have watched new students, over and over, struggle with how to properly manipulate it. Suddenly, a student’s hands and feet, which have reliably coordinated all of his life, become obstacles.

What makes a stick more difficult to wield than a sword? Many factors, but the one I would like to emphasize here is ambidexterity. In jodo, as in naginata (glaive), the weapon is used with either hand topmost. Even though I am left-handed, I still had a difficult time managing the left side (one of my colleagues used to remark, sarcastically, “You make a good jodoka – for a sword person,” because of the relative weakness of my left-side technique). Jodo kihon, with a few exceptions, are practiced both left- and right-handed, usually alternating sides. Even in instances where only the right side of a kihon is practiced, the kata feature all of the kihon performed on both left and right sides.

I worry that new people will get frustrated and quit (some do), but there really isn’t anything I can do to help them out of this very awkward stage. They just have to be stubborn and keep trying. Each person has to get through this early phase of training on her own. The best way to handle this, as I stated in my previous post about swordsmanship practice, is to pick up the jo every day for a few minutes and practice some of the kihon. When I was starting jodo practice, I lived alone in a small apartment with a mercifully high ceiling and a long, narrow hallway connecting the different rooms. This narrow hallway, too narrow for anything really, even on the walls, became my jodo dojo. Whenever I had a few minutes, I would go up and down the hallway, practicing whatever kihon I had been shown the previous week.

It helped. I began to get used to the proper hand placement (not that I still didn’t need continuous correction) and, began to understand how footwork coordinates with the timing of the strikes I was working on. (Same caveat — if this stuff were simple, I’d be positively an expert by now.) Most importantly, I learned to switch from right to left, and back again.

After a few weeks, the sempai who was teaching us what little jodo he knew, remarked, in front of the class, “Deborah has been practicing.” Maybe I was the only one with a long hallway. Practicing a little bit, from time to time, on my own, made it much easier to pick up and understand the couple of kata the sempai introduced to us.

Like my old sempai, I am also very gratified to see very new students advance (at their own pace). They start out being utterly confused, but slowly begin to understand basic technique, and their body language – posture, footwork, coordination – changes accordingly. That’s why I wish I could tape them, and then show them how well they have progressed. This new-found coordination is no small achievement, and I notice that students’ self-esteem rises as a result (until the next confounding aspect of practice comes along, at least).

Generally speaking, we hate looking foolish in front of others (Facebook notwithstanding). Because of that, many people do not have the persistence to keep working at something in a class setting until they start to get it. As a teacher, it’s my job to create a welcoming atmosphere, along with my students, so that newcomers feel that they can learn along with us.