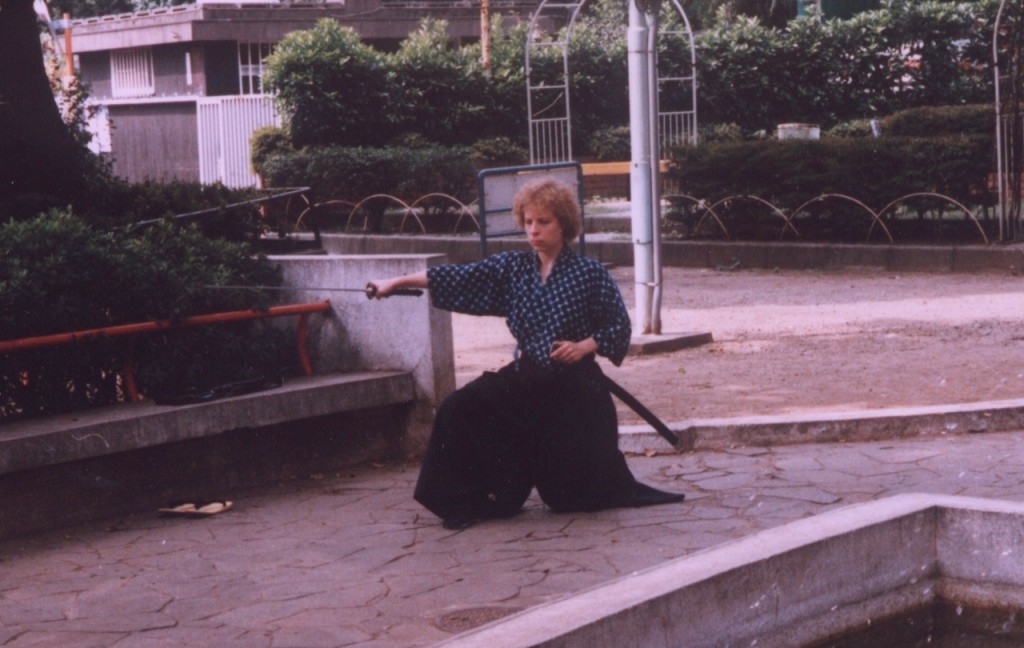 There are lots of stories about old Japanese budo masters taking on new students. Probably the most famous one involves the student begging, and begging, and BEGGING to be taken in as an uchi deshi (a “house student” – one who literally does household chores in exchange for lessons). The master reluctantly agrees. The student is given only household chores and no budo lessons at all. To top off the student’s humiliation, the teacher, now and then, creeps up behind him with wooden stick, and hits the student as he is absorbed in some mundane task. Depending on which version of the story you read, it takes months, or years, but finally the student learns to hear the teacher coming up behind him, and also learns to evade the stealthy blows. Once he learns this, the master congratulates him, declares the beginning of his apprenticeship to be over, and begins to teach him in earnest.

We don’t do that. As much as I would love some household help, new students in the sword and stick classes are introduced to what we do every week. We have an integrated class; that is, the new students are put in with the more advanced ones. There are several reasons for this. The practical one is that there is only one class each week. More to the point, even the students who have only been there a few months are still, technically, very much beginners, so the lessons are pretty much on the same level. My job, for a student’s first class, is to introduce him to what we do, so he knows what to expect if he decides to continue.

The stick-fighting class looks simple enough on its face. After all, as I said in a previous post, it’s just a stick. It has no features whatsoever – no right or wrong end, no sides. The sune is used in either hand, and either end of it works just as well. As I said previously, this simplicity is what makes it so very difficult to learn. That, and the fact that, in jodo, there is always a human at the other end of the stick. Not only do we have to learn technique, we have to learn each individual attacker’s timing and spacing as well!

So, we toss new people a little bit into the deep end. Given the time and space constraints, we are not able to take a new person by the hand and show them every little thing she needs to know in order to get started. In this, we are somewhat traditional. There are many stories, told by Americans, at least, of starting at a new dojo in Japan and simply being put in the back of the room to follow along as best he can – for months – until some senior student or perhaps even the teacher herself starts to correct his form. Gradually, over time, as his skills improve, he becomes more integrated into the group.

On the other hand, we know that most students in the US who are left to flounder on their own are unlikely to continue, so we have adapted a hybrid approach wherein new people are integrated into the mix much sooner. As an instructor, I take great interest in watching a motivated beginner improve week after week. Even students who have studied other martial art styles have to adapt to the movement of a jodo or iaido class, and adapt they do. Sometimes I wish I could show a video of new students from the first time they walked through the door, until what their practice looks like six months later. They would get to see all the improvements I see. But I don’t tape them, of course. I am just happy they keep showing up!