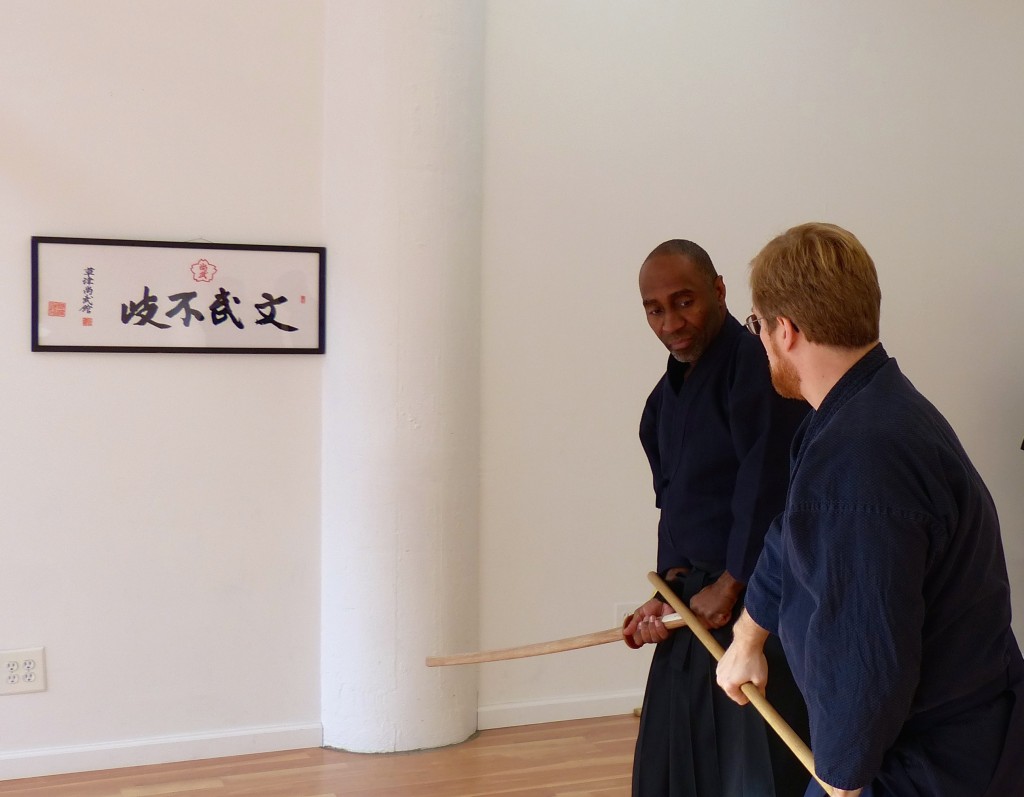 At the beginning and end of every practice, we perform a series of bows. In both the sword and stick classes, the first and last bow of the class is to the shinzen, a framed piece of calligraphy on the wall. What is a shinzen, and why do we have one?

Literally, shinzen 神前 (しんぜん) means “before god,” as in an altar, or a place set aside for spiritual devotion. Different martial arts groups have different feelings about the significance of the shinzen to budo practice, but, even in other parts of the world where Japanese martial arts are practiced, most dojo will have some spiritual place set aside, whether a kamidana 神棚 (かみだな) (literally, a “god shelf,” or small shrine found in Shinto) or a shinzen. The best non-Japanese example of a kamidana can be found in aikido dojo, which typically have a photo of Ueshiba Morihei, the founder, and perhaps some flowers or other decoration. The shelf is generally located high up on wall, well out of the way of the students, but is everpresent, as if O-Sensei himself were watching the practice below. In bowing to this particular kamidana at the beginning and end of practice, students are acknowledging their debt to the founder of aikido. Any further spiritual significance is in the mind of the beholders.

Our shinzen is a piece of calligraphy by one of my teachers, Kiyama Hiroshi. Even though it is horizontal text, which in modern-day Japan is usually read from left to right like English, this type of calligraphy is traditionally read from right to left (文武不岐 – ぶんぶふき). The calligraphy in this case means “Culture and warriorship [are] the same path.” In our case (and since I am a secularist), the shinzen in the Resobox studio suggests a spiritual dimension that helps us locate our practice in a place separate from the cares of everyday life. It is not tied to any specific religious doctrine. When we bow to this particular shinzen, we are acknowledging a higher level to our practice than just learning techniques. We show respect to the tradition and our teachers who came before us, much like the aikido students do before the photo of O-Sensei.

I once asked my teacher, Otani Yoshiteru, about the meaning of the shinzen in his dojo. The calligraphy on that shinzen (which he wrote himself) translated as “Great universe, great god spirit.” He said it was simply a focal point; a way of locating the spiritual aspect of practice that was visible for everyone. After that, individuals could ascribe whatever meanings to it that they liked (if any).

Every now and then, someone with deeply held religious beliefs will express reservations about bowing to the shinzen; not being sure whether bowing would be an act of sacrilege in their own faith. I give the person the explanation I just mentioned above and then let him make his own decision. The fact is that in Japan, even people who express a preference for Buddhism or Shinto follow a variety of practices and don’t feel any particular concern over bowing in a dojo in front of a piece of calligraphy. I look at Kiyama sensei’s calligraphy every week and consider its meaning. To me, it represents the idea that what we learn in the dojo should be applied to our everyday lives. If you follow the idea that budo study leads to self-improvement, taking that skill and applying it to the world around you is a worthwhile endeavor. Definitely one worth bowing to.