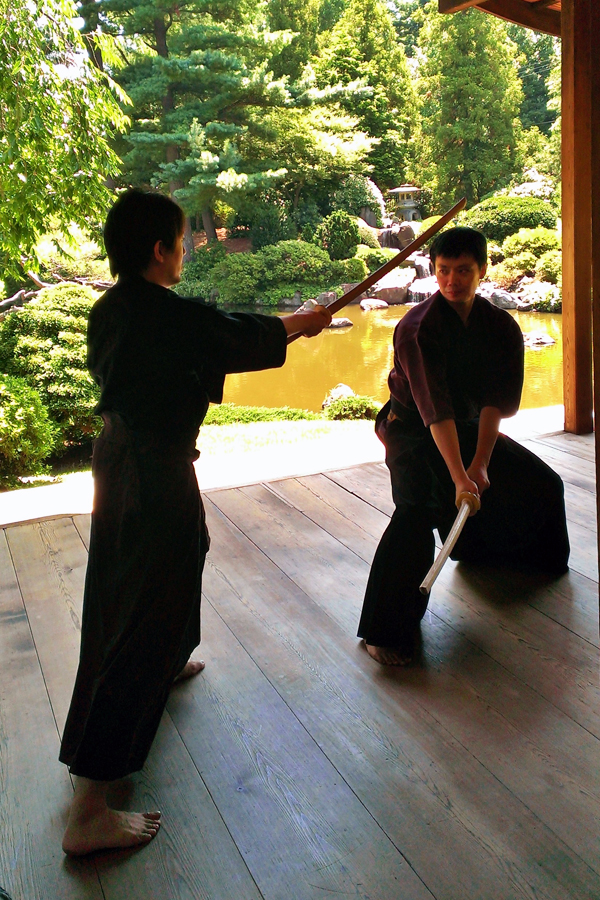 Americans don’t think much of feet. Women in particular wear painful footwear (something I never really understood). Unless there is something egregiously wrong with them, we are content to let our feet carry us through life without a second thought.

Once taking up Japanese swordsmanship, however, that changes. Feet have to actually do something. I can tell someone’s skill level not by how many kata he knows, but by his footwork. Let’s look at some elements of footwork for Japanese sword practice.

Most westerners (or, actually, people who wear western-style shoes), walk heel-to-toe. In Japanese swordsmanship, we use a style of footwork called suriashi, or “sliding foot.” When taking a step, the foot glides along the ground, the toes and upper ball of the foot slightly raised until the step is completed, when the foot is placed flat on the floor. Suriashi has the effect of lowering one’s body weight, causing the knees to bend slightly. As I will explain below, suriashi has advantages for the swordsman.

When the swordsman rises from the kneeling posture of seiza, the first thing that happens is the feet come up, toes under. A foot that remains flat is sometimes called a “dead foot,” and with good reason.

There is a myth that suriashi footwork developed because modern swordsmanship is practiced indoors. On a smooth floor, people say, since there are no gaps or pits or changes in level, it’s easy to glide along. Leaving aside that whoever came up with this idea never practiced in a New York City loft building, just the opposite is true. Sliding the feet came from having to face an opponent outdoors. Outside ground is uneven. As we walk down the street, wearing our shoes, whether we notice it or not, we are constantly monitoring our path for any uneven sidewalk, broken glass, dog poo, or anything else that might impede progress. Now, consider a dueling situation. Taking your eyes off of your opponent for even a split second could be suicidal. The only way to keep your attention where it belongs is to – you guessed it – feel your way, by sliding your feet.

Keeping feet shoulder distance apart and parallel has many benefits; most importantly, keeping better balance on uneven terrain. Whether partly kneeling or standing, shoulder-width is much better than having the knees too close together. Additionally, in weapon arts generally, you should always keep your full attention aligned on your opponent. Keeping feet shoulder width and parallel helps maintain this posture, as well as insuring maximum reach when holding a weapon (like a sword) in both hands. Turning one foot even slightly to one side or the other changes the distance between you and your opponent. Bringing the toes “live” as the student rises from seiza is an extension of this idea – it keeps the posture strong and stable, and makes it easier to rise quickly.

One of the most difficult habits for beginning students to break is having feet that turn outward while walking or standing. Once acquiring good footwork, however, students gain a strong foundation for all of their subsequent techniques.