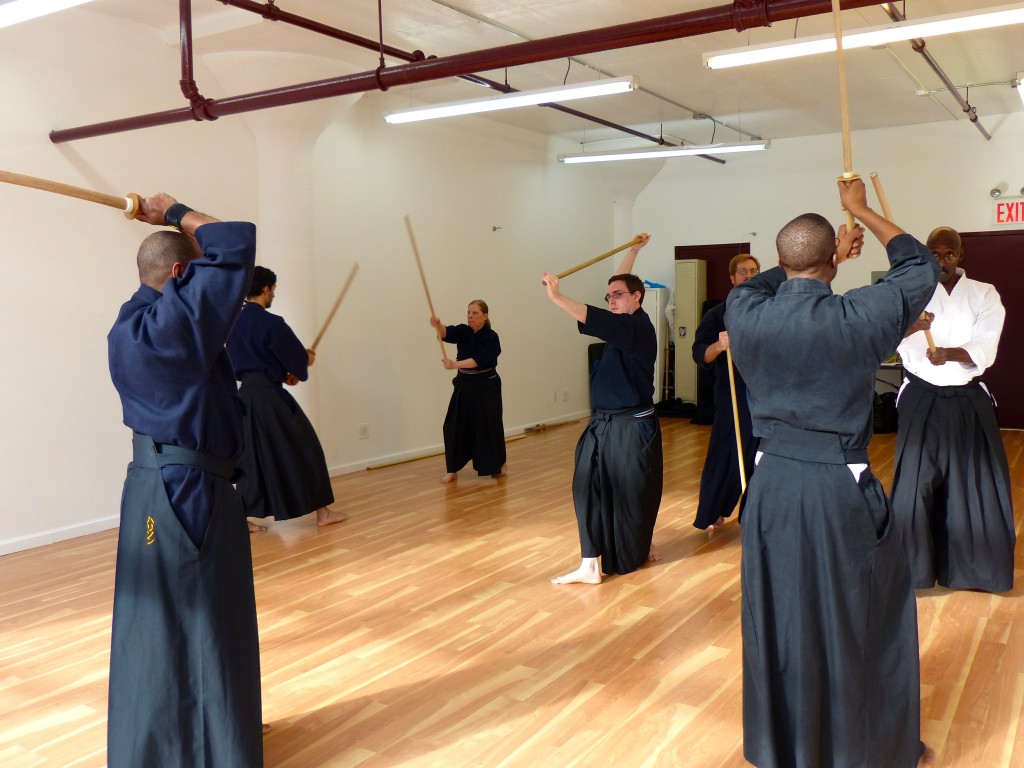 The teacher stood at the front of the room, a cavernously large dojo, wherein my colleague, my student and I occupied a small part. The rest of the room echoed around us. He held a wooden sword in his hand. “Mo ichi do,” (“One more time”) he intoned, tapping the butt-end of the sword on the hollow wooden floor for emphasis.

We began again, working through all ten kata of the standing set of the Shinto Hatakage Ryu Iai Heiho, an old and rather obscure style. We repeated and repeated, for the better part of three hours. Mostly, the teacher said nothing. Occasionally, he would make a correction. Each repetition of the entire set took about 15 minutes, so we worked through the set around 8-10 times (I wasn’t counting). By the end of the practice, we were sweaty and tired – and exhilarated.

When most Americans think of martial arts practice, they imagine lines of students in crisp, white uniforms, moving in unison and shouting “Yes, sir!” in loud voices whenever the teacher makes a request or gives an order. Koryu budo (old style martial arts) sword practice is quite different. Sometimes the group repeats traditional kata together, as we did in Japan several weeks ago; or, just as likely, the students spread out, each one working on individual kata, while the teacher circulates around the room, making corrections. Sometimes, when she decides the student is ready, the instructor assigns a new kata for a student to work on.

There are advantages to both types of practice. What they have in common, of course, is repetition. Repeating movements over and over sets up kinetic patterns, helping students remember the kata better. As good as group repetition is, however, for my part, individual practice at one’s own pace is the best way to learn kata. Repeating kata over and over again individually allows the student to develop concentration, so he can ignore whatever anyone else in the room is doing. Most importantly, perhaps, individual, repetitive practice encourages the student to solve problems and resolve questions about the movement and its meaning on his own terms. And, if he has any questions he can’t answer, the teacher is there to guide him.

Since we have moved into the new Resobox Studio, we have had enough room to spread out and work individually on different kata. As an instructor, I can see what sort of progress each individual student is making. As a student, I find it is the best way to both learn and remember sword kata. Even the very newest student, who has only been taking the sword class for a few months, is able to work on the first kata, starting to learn it on his own.

The other night, after about 10 minutes of practicing kata individually, everyone was exhausted. (People work a lot harder on individual sword kata on their own than they do as a group). At the end of the class, the students presented what they had learned, and everyone got some further corrections. And, I think, everyone felt a sense of accomplishment.