As an American fan of anime and manga, I will admit for years that the sports genre eluded me. Brought into the fandom through Dragonball Z, Sailor Moon, and Pokemon, I only dabbled in the genre briefly, reading a few volumes of Prince of Tennis, and two chapters of Slam Dunk. As with many of my friends, I was enamored by science fiction battles, samurai stories, and the vast realms of the Japanese supernatural.

Coming off a Winter 2014 anime season that indulged all those previous interests, the Spring series offered not one, but two sports-based anime that I might have skipped, were it not for a bit of burnout with the former genres, and a definite interest in discovering something new. Neither of them feel the same as my previous forays into the genre, but offer interesting “takes” on theme, art, and character that enhance the experience. 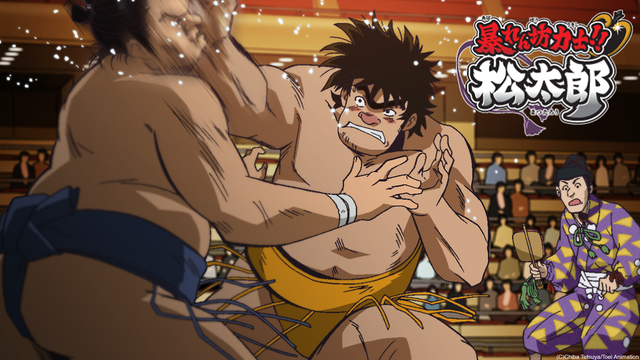 First on display is Abarenbou Rikishi Matsutaro (Rowdy Sumo Wrestler Matsutaro), based on the 1973-1998 manga series “Notori Matsutaro” by Chiba Tetsuya. Right off the bat, it is clear that this is an unconventional series- part fighting show, part comedy- introducing the viewer to Matsutaro, an adult stuck in middle school, who has few morals and even fewer scruples. After getting the best of a respected ozeki during a local exhibition (which Matsutaro viewed as a fight for his personal honor), numerous schools pursue the reluctant, lazy man, who eventually agrees to move to the city and train…but only because of the proximity of his dojo to the female teacher he is madly infatuated with.

What succeeds about Matsutaro’s story is his comic character- all muscle-bound aggression and immaturity- and the way the show weaves traditional sumo culture into the narrative. Unlike other martial arts, the perception of sumo is very idealized (or misinformed), mostly thanks to games like Street Fighter, or American professional wrestling. Rowdy Sumo Matsutaro presents the lifestyle and experiences of professional sumo and its students in grounded terms, instructing on the history and culture of the event, while practically thrusting the viewer into Matsutaro’s shoes. As someone completely unversed in sumo as a sport, the series serves as a solid starting point, answering some questions while opening the door for others. The series is currently available for streaming on Crunchyroll.com

The second series is Ping Pong: The Animation, based on Matsumoto Taiyo’s 1996-97 manga of the same name. Like Rowdy Sumo Matsutaro, this series is built around strong characters. But unlike Matsutaro, who is so over-the-top that he stands out as a caricature of shonen fighting heroes, the twin protagonists of Ping Pong- arrogant Peco and introverted Smile- are all too real. 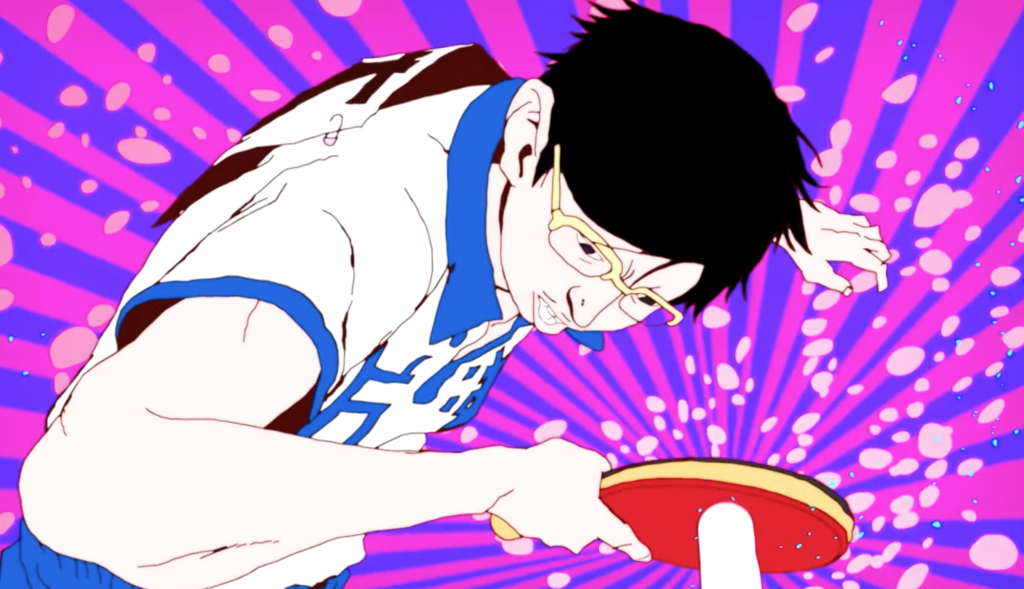 Ping Pong also melds together genre voices, this time shonen action and gekiga storytelling. The serious tone of the series is reinforced through stylized art, and a fantastic soundtrack practically drawn from a child’s sentai series. Peco is the upstart young talent, a boy who trash talks his opponents and lives on his glorious childhood of awards and table tennis dominance. Smile is his quiet companion- he can barely be considered a friend, given how Peco treats him like a lapdog and personal drilling dummy- a boy who’s latent abilities at the game far exceed Peco’s, but who downplays them because the game isn’t “his life.” During the course of the story, both boys- first year high school students- navigate the world of school clubs and teams, which often lead them into conflict with their fellow classmen, and the dedicated players from other schools.

What draws viewers in is the stark contrast between Peco and Smile. Viewers will love to hate the former and see him knocked down, while the latter is an archetypal reluctant hero and underdog, who viewers will likely cheer. While Smile is a boy of few words, we thankfully are given privy to his thoughts during the episodes, which range from a disgust for club life, to criticism of those around him (and eventually himself). The past plays out in short spurts, where the characters reminisce about past glories, and question the motives and instances that led them to their current station in life, their shortcomings, and how devotion to a single goal can go horribly awry.

While Ping Pong does eventually become a series about playing the game (and the politics behind team sports, plotting, and competition scenes on par with any fight series), the character’s stories and experiences are where it draws its power. Not typical of other sports shows, but nuanced, which will appeal to both casual viewers and appreciators of both game and genre. The series is currently available for streaming from Funimation. 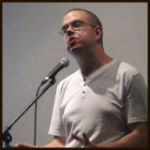